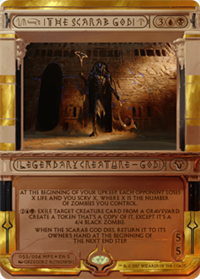 At the beginning of your upkeep, each opponent loses X life and you scry X, where X is the number of Zombies you control.

2UB: Exile target creature card from a graveyard. Create a token that's a copy of it, except it's a 4/4 black Zombie.

When The Scarab God dies, return it to its owner's hand at the beginning of the next end step.

7/14/2017 The number of Zombies you control is counted as The Scarab God’s first ability resolves. Players can try to change that number in response to the ability (perhaps by activating its second ability).
7/14/2017 The token copies exactly what was printed on the original card and nothing else, except the characteristics it specifically modifies. It doesn’t copy any information about the object the card was before it was put into its owner’s graveyard.
7/14/2017 The token is a Zombie instead of its other types (unlike Zombies created by an eternalize ability) and is black instead of its other colors. Its power and toughness are 4/4. These are copiable values of the token that other effects may copy.
7/14/2017 Unlike the tokens created by an eternalize ability, this token has the mana cost and thus converted mana cost of the card it’s copying.
7/14/2017 If the card copied by the token had any “when [this permanent] enters the battlefield” abilities, then the token also has those abilities and will trigger them when it’s created. Similarly, any “as [this permanent] enters the battlefield” or “[this permanent] enters the battlefield with” abilities that the token has copied will also work.
7/14/2017 In a Two-Headed Giant game, The Scarab God’s first ability causes the opposing team to lose life equal to twice the number of Zombies you control, although you scry only equal to the number of Zombies you control.
7/14/2017 If this creature dies but leaves your graveyard before the next end step, it will remain in its new zone.
7/14/2017 The “next end step” refers to the next end step that occurs, not the end step of the next turn. If this creature dies before a turn’s end step (for example, during combat), it will be returned to its owner’s hand at the beginning of that turn’s end step.
Posts Quoted:
Reply
Clear All Quotes
Back to Top