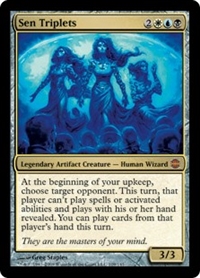 At the beginning of your upkeep, choose target opponent. This turn, that player can't cast spells or activate abilities and plays with their hand revealed. You may play cards from that player's hand this turn.

5/1/2009 Playing a card this way works just like playing any other card, with one exception: You're playing the card from your opponent's hand rather than your own. To be specific:
-- A card played this way follows the normal timing rules for its card type, as well as any other applicable restrictions such as “Cast [this card] only during combat.” For example, you can't play a card from the targeted opponent's hand during your end step unless it's an instant or has flash.
-- To cast a nonland card from your opponent's hand this way, you must pay its mana cost.
-- You can play a land card from the targeted opponent's hand only if you haven't played a land yet that turn.
5/1/2009 You control the spells you cast from your opponent’s hand, so you make decisions for them as appropriate. For example, if one of those spells says “target creature you control,” you’ll target one of your creatures, not one of your opponent’s creatures.
5/1/2009 If you cast a spell with cascade this way, you’ll control the cascade ability. When it resolves, you’ll find a new card to cast from your own library.
5/1/2009 You can cast spells from the targeted player’s hand, but you can’t activate abilities. Specifically, you can’t cycle cards in that player’s hand.
5/1/2009 This ability doesn’t prevent the targeted opponent’s triggered abilities from triggering. If one does, that player puts it on the stack and, if applicable, chooses targets for it. Those abilities will resolve as normal.
5/1/2009 If the resolution of a spell or ability involves having the targeted player cast a spell, that part of the effect simply won’t work.
5/1/2009 After this ability resolves, the targeted player still gets priority at the appropriate times, and can still perform special actions (such as turning a face-down creature face up). However, since that player can’t cast any spells or activate abilities — including mana abilities — there’s not much they can actually accomplish this way.
5/1/2009 If you start to play a card from the targeted opponent’s hand, there’s no way for the opponent to get rid of that card in response (like discarding it to pay Gathan Raiders’s morph cost, for example). That’s because the first thing that happens when you start to cast a spell is that it moves to the stack, so it’s not in your opponent’s hand anymore.
5/1/2009 Once Sen Triplets’s ability resolves, it remains in effect for the rest of the turn whether or not you still control Sen Triplets.
Posts Quoted:
Reply
Clear All Quotes
Back to Top