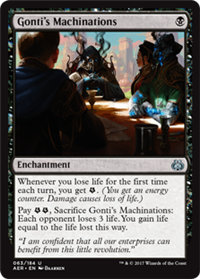 Whenever you lose life for the first time each turn, you get EnERGy. (You get an energy counter. Damage causes loss of life.)

2/9/2017 The triggered ability gives you at most one energy counter each turn, regardless of how much life you lost.
2/9/2017 In a Two-Headed Giant game, damage and life loss happen to individual players, and the result affects the team’s life total. Combat damage is assigned and dealt to specific players. If your teammate is dealt damage or otherwise loses life, Gonti’s Machinations doesn’t trigger, even though your life total went down.
2/9/2017 In a Two-Headed Giant game, Gonti’s Machinations’s second ability causes the opposing team to lose a total of 6 life.
2/9/2017 is the energy symbol. It represents one energy counter.
2/9/2017 Energy counters are a kind of counter that a player may have. They’re not associated with specific permanents. (Other kinds of counters that players may have include poison and experience.)
2/9/2017 Keep careful track of how many energy counters each player has. You may do so by keeping a running count on paper, by using a die, or by any other clear and mutually agreeable method.
2/9/2017 If an effect says you get one or more , you get that many energy counters. To pay one or more , you lose that many energy counters. Any effects that interact with counters a player gets, has, or loses can interact with energy counters.
2/9/2017 Energy counters aren’t mana. They don’t go away as steps, phases, and turns end, and effects that add mana “of any type” to your mana pool can’t give you energy counters.
2/9/2017 You can’t pay more energy counters than you have.
Posts Quoted:
Reply
Clear All Quotes
Back to Top