Sign In Register
2019 Holiday Exchange!
A New and Exciting Beginning
The End of an Era
Avg Price $1.01
Buy on TCGPlayer
​ 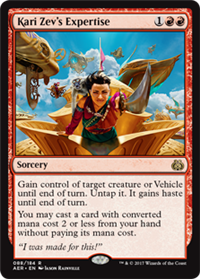 You may cast a card with converted mana cost 2 or less from your hand without paying its mana cost.

2/9/2017 Kari Zev’s Expertise can target any creature or Vehicle, even one that you already control or that is already untapped.
2/9/2017 If the Expertise spell you cast has any targets, and those targets become illegal before the spell resolves, the spell doesn’t resolve and none of its effects happen. You won’t get to cast a free spell.
2/9/2017 A card’s converted mana cost is determined solely by the mana symbols printed in its upper right corner. The converted mana cost is the total amount of mana in that cost, regardless of color. For example, a card with mana cost has converted mana cost 3. Ignore any alternative costs, additional costs, cost increases, or cost reductions that could apply to it. A card with no mana cost has a converted mana cost of 0.
2/9/2017 If the card has in its mana cost, you must choose 0 as the value of X when casting it without paying its mana cost.
2/9/2017 Effects that allow you to “cast” a card don’t allow you to play a land card.
2/9/2017 If you cast a card “without paying its mana cost,” you can’t choose to cast it for any alternative costs, such as emerge costs. You can, however, pay additional costs. If the card has any mandatory additional costs, such as that of Cathartic Reunion, you must pay those to cast the card.
2/9/2017 While you’re casting your free spell, the Expertise spell is still on the stack. It will be put into its owner’s graveyard after the free spell is cast. The free spell can’t target the Expertise card in your graveyard. It can target the Expertise spell on the stack, but the Expertise spell will become an illegal target before the free spell resolves.
2/9/2017 Any triggered abilities that trigger while performing the Expertise spell’s first effect won’t be put onto the stack until after you’re done casting your free spell. They’re put onto the stack at the same time as any abilities that triggered while casting that spell regardless of the order in which those abilities triggered.
4/18/2017 The converted mana cost of a split card is determined by the combined mana cost of its two halves. If an expertise spell allows you to cast a split card, you may cast either half or, if that split card has fuse, both halves.
Posts Quoted:
Reply
Clear All Quotes
Back to Top