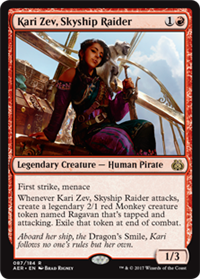 2/9/2017 You choose which opponent or opposing planeswalker Ragavan is attacking as you create the token. It doesn’t have to be the same player or planeswalker Kari Zev is attacking.
2/9/2017 Although Ragavan is attacking, it was never declared as an attacking creature (for the purposes of abilities that trigger whenever a creature attacks, for example).
2/9/2017 The delayed triggered ability that exiles Ragavan triggers at end of combat even if Kari Zev is no longer on the battlefield.
Posts Quoted:
Reply
Clear All Quotes
Back to Top