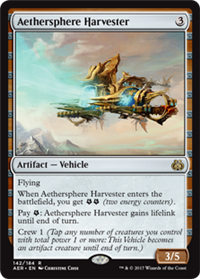 When Aethersphere Harvester enters the battlefield, you get EnERGyEnERGy (two energy counters).

Crew 1 (Tap any number of creatures you control with total power 1 or more: This Vehicle becomes an artifact creature until end of turn.)

2/9/2017 multiple instances of lifelink on the same creature are redundant.
2/9/2017 is the energy symbol. It represents one energy counter.
2/9/2017 Energy counters are a kind of counter that a player may have. They’re not associated with specific permanents. (Other kinds of counters that players may have include poison and experience.)
2/9/2017 Keep careful track of how many energy counters each player has. You may do so by keeping a running count on paper, by using a die, or by any other clear and mutually agreeable method.
2/9/2017 If an effect says you get one or more , you get that many energy counters. To pay one or more , you lose that many energy counters. Any effects that interact with counters a player gets, has, or loses can interact with energy counters.
2/9/2017 Energy counters aren’t mana. They don’t go away as steps, phases, and turns end, and effects that add mana “of any type” to your mana pool can’t give you energy counters.
2/9/2017 You can’t pay more energy counters than you have.
9/29/2017 Each Vehicle is printed with a power and toughness, but it’s not a creature. If it becomes a creature (most likely through its crew ability), it will have that power and toughness.
9/29/2017 If an effect causes a Vehicle to become an artifact creature with a specified power and toughness, that effect overwrites the Vehicle’s printed power and toughness.
9/29/2017 Vehicle is an artifact type, not a creature type. A Vehicle that’s crewed won’t normally have any creature type.
9/29/2017 Once a player announces that they are activating a crew ability, no player may take other actions until the ability has been paid for. Notably, players can’t try to stop the ability by changing a creature’s power or by removing or tapping a creature.
9/29/2017 Any untapped creature you control can be tapped to pay a crew cost, even one that just came under your control.
9/29/2017 You may tap more creatures than necessary to activate a crew ability.
9/29/2017 Creatures that crew a Vehicle aren’t attached to it or related in any other way. Effects that affect the Vehicle, such as by destroying it or giving it a +1/+1 counter, don’t affect the creatures that crewed it.
9/29/2017 Once a Vehicle becomes a creature, it behaves exactly like any other artifact creature. It can’t attack unless you’ve controlled it continuously since your turn began, it can block if it’s untapped, it can be tapped to pay a Vehicle’s crew cost, and so on.
9/29/2017 You may activate a crew ability of a Vehicle even if it’s already an artifact creature. Doing so has no effect on the Vehicle. It doesn’t change its power and toughness.
9/29/2017 For a Vehicle to be able to attack, it must be a creature as the declare attackers step begins, so the latest you can activate its crew ability to attack with it is during the beginning of combat step. For a Vehicle to be able to block, it must be a creature as the declare blockers step begins, so the latest you can activate its crew ability to block with it is during the declare attackers step. In either case, players may take actions after the crew ability resolves but before the Vehicle has been declared as an attacking or blocking creature.
9/29/2017 When a Vehicle becomes a creature, that doesn’t count as having a creature enter the battlefield. The permanent was already on the battlefield; it only changed its types. Abilities that trigger whenever a creature enters the battlefield won’t trigger.
9/29/2017 If a permanent becomes a copy of a Vehicle, the copy won’t be a creature, even if the Vehicle it’s copying has become an artifact creature.
Posts Quoted:
Reply
Clear All Quotes
Back to Top