Sign In Register
2019 Holiday Exchange!
A New and Exciting Beginning
The End of an Era
Avg Price $0.38
Buy on TCGPlayer
​ 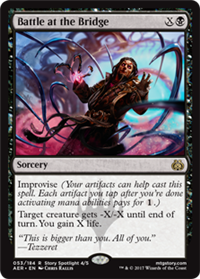 Target creature gets -X/-X until end of turn. You gain X life.

2/9/2017 If the target creature becomes an illegal target, Battle at the Bridge doesn’t resolve and none of its effects happen. You won’t gain life.
2/9/2017 Improvise doesn’t change a spell’s mana cost or converted mana cost.
2/9/2017 When calculating a spell’s total cost, include any alternative costs, additional costs, or anything else that increases or reduces the cost to cast the spell. Improvise applies after the total cost is calculated.
2/9/2017 Because improvise isn’t an alternative cost, it can be used in conjunction with alternative costs.
2/9/2017 Improvise can’t pay for , , , , , or mana symbols in a spell’s total cost.
2/9/2017 Improvise can’t be used to pay for anything other than the cost of casting the spell. For example, it can’t be used during the resolution of an ability that says “Counter target spell unless its controller pays .”
2/9/2017 If an artifact you control has a mana ability with in the cost, activating that ability while casting a spell with improvise will result in the artifact being tapped when you pay the spell’s costs. You won’t be able to tap it again for improvise. Similarly, if you sacrifice an artifact to activate a mana ability while casting a spell with improvise, that artifact won’t be on the battlefield when you pay the spell’s costs, so you won’t be able to tap it for improvise.
2/9/2017 Tapping an artifact won’t cause its abilities to stop applying unless those abilities say so.
2/9/2017 Equipment attached to a creature doesn’t become tapped when that creature becomes tapped, and tapping that Equipment doesn’t cause the creature to become tapped.
2/9/2017 When using improvise to cast a spell with in its mana cost, first choose the value for X. That choice, plus any cost increases or decreases, will determine the spell’s total cost. Then you can tap artifacts you control to help pay that cost. For example, if you cast Whir of Invention (a spell with improvise and mana cost ) and choose X to be 3, the total cost is . If you tap two artifacts, you’ll have to pay .
1/19/2018 There are many important moments in the story, but the most crucial—called “story spotlights”—are shown on cards. These cards have the Planeswalker symbol in their text box; this symbol has no effect on gameplay. You can read more about these events in the official Magic fiction at http://www.mtgstory.com.
Posts Quoted:
Reply
Clear All Quotes
Back to Top