For the first time in three years, we are graced with another core set. While core cets are generally known for their reprints, they can also bring with them new cards and rarity downshifts that can find a home in the beloved Pauper format. While Core Set 2019 offers far fewer new cards than a traditional set and no applicable downshifts, it does offer us several quality cards that deserve attention. Let's delve right in. 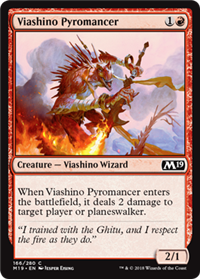 Burn often just wants to race, and when Burn races, strategy can often boil down to the luck of the draw. Countering the topdeck raffle is where Burn-centric creatures come into play. Creatures like Firebrand Archer, Keldon Marauders, and Thermo-Alchemist can not only add direct damage, they can interact with the board. Even a small body can buy you time and give your opponent a hurdle that wins you the race. This can be exactly where Viashino Pyromancer finds its niche.

Pyromancer offers a decent burn spell coupled with a 2/1 body that sticks around. That body is the profit margin that always gives you some kind of bonus dividends. If it swings through, then your damage-to-card ratio cranks way up. If it trades with a creature, or even if it simply chump blocks something, it's given you an edge in the death race. This is exactly what has made Keldon Marauders a Burn all-star. Pyromancer may lose a bit of body in comparison, but it can also stay around for more than a turn.

Burn isn't the only place our lizard wizard can find a home either. Beyond just being a Burn inclusion, the instant damage with a decent body also lends itself well to the kind of zerg-rush decks that even our aforementioned Burn has trouble racing with. Looking at it as a fast stompy body, it sets a quick pace. Many Red/Green Aggro builds already focus on high octane damage, combining cards like Reckless Charge and Reckless Abandon to go pedal-to-the-metal all-in stompy. Pyromancer's the perfect fit for a Rancor here: we're not concerned if something dies during its swing, we just want it to deal as much damage as quickly as possible. Pyromancer excels at that. 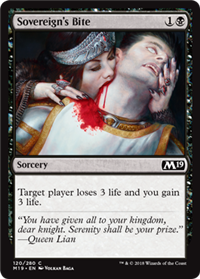 Ironically, the next card takes us right back into Burn territory. Burn players have been flirting with splashing black since Bump in the Night was first printed, and this idea gained some ground the next year when Tyrant's Choice followed. These two combined with Blightning gave Burn the same level of direct damage it was used to while allowing it a second color to explore and open the sideboard. With black only being a small splash, however, the benefits were often outweighed by the inconsistencies in a two color deck's mana. Sovereign's Bite, however, ups the count of black burn and expands it from a splash to a core part of the deck.

One of the strengths of running black is that it offers burn with benefits. If we glance at Modern Burn, we'll see colors splashed for this exact reason. Lightning Helix is a prime example, and the comparison to Sovereign's Bite is direct. Although Bite can't hit creatures, the added life gain is just as important. Again, Burn wants to race and every bit of disruption or life differential increases your ability to race. 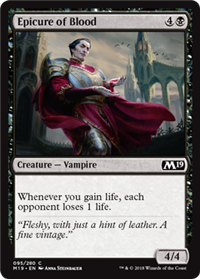 Epicure of Blood is easy to overlook. Its stats are run-of-the-mill at best, and its ability is generally underwhelming. In truth, it looks like subpar draft fodder that will easily be forgotten, and throwing it into an untailored deck will show you that it normally is exactly that. In the proper niche, however, the stars align and its ability can shine so bright as to make it an instant MVP.

BW Soul Sisters is that niche. BW Soul Sisters offers a combination of incremental life gain from the soul twins, as well as incremental drain from extortion creatures. These two abilities merge to form a deck that is constantly gaining small ticks of life, easily outpacing most decks' initial rush. Enter Epicure of Blood, which then turns each of those lifegain ticks into direct damage. All Epicure needs is time, and Soul Sisters already excels at offering that. Generally, Soul Sisters uses the accumulating life to delay the game until it can simply overrun the opponent with its small army. Epicure offers a more direct way to do this, bypassing the need for combat altogether. Gaining four or five life in a turn is common, and when every card has a Soul Feast or Needlebite Trap tacked on, the game ends quickly.

Notably, this deck has a lot of potential for tuning, adaptation, and preference. While the core of such a deck is fairly cemented, there's still a lot of room left for innovation. There's a great multitude of removal and disruption options in these colors as well as plenty of options to flesh out the creature and spell selection. Green even stands out as a possible third color splash for Essence Warden, Selesnya Evangel, and/or Sprout Swarm. In the end, there's enough room for adaptation and growth that an Epicure-driven Soul Sisters can find its place. 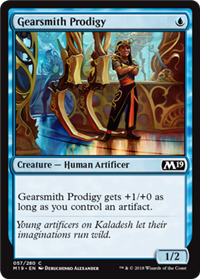 Blue finally has its own Nerd Ape, albeit with one less toughness. Blue is generally devoid of aggressive creatures, so a 2/2 for one mana definitely deserves some attention. Blue's love of artifacts has proliferated every format, especially so in Pauper. Although Affinity first springs to mind when we talk about artifact blue, Prodigy doesn't fit well into that deck. Affinity's early drops need to directly work with its mechanics, which generally means being an artifact, and a vanilla 2/2 doesn't increase its board position the way the rest of the deck does. Prodigy is still a great card, but his talents lie elsewhere.

The deck that Prodigy feels most at home in is a Metalcraft build. Currently, Metalcraft has a white core with either a red splash or a green splash. It almost always eschews blue completely, and decks that try a third color generally have poor results. There are two key cards that push red and green: Galvanic Blast and Carapace Forger. Each adds a strong, aggressive element that helps compound its core. Blue has only offered support cards like Thoughtcast and Metallic Rebuke until now. With Metalcraft coming out of the gate fast, it needs its splash to directly add more aggression. Support cards are fine, but it's always looking for that extra aggro kick. This is where Prodigy comes into play, putting blue back on the table. Metalcraft has a core set of early drops, such as Court Homunculus and Ardent Recruit, and adding Prodigy ramps up the early game aggro the way the deck wants. WU Metalcraft is now a legitimate option thanks to our new Gearsmith Prodigy.

The above four are marquee cards that beg new designs and innovation, but are not the only good new cards Core Set 2019 brings us. There are a few other cards that definitely need mentioning, but won't be instant successes like above. I'll go over these more quickly.

Aven Windmage has a psuedo-prowess, built-in evasion, and an extra toughness over Jeskai Windscout. That one toughness matters. Aven Windmage can kill a Kor Skyfisher with a single spell, surviving the encounter unlike its 2/1 friends. It has the best evasive body for a three-drop spells-matter creature. It's not a rock star, but it seems to be great for its slot.


Its bonus damage on a 2/1 body is reminiscent of Viashino Pyromancer above. The difference between possible damage and guaranteed direct damage is considerable, however. Drillmaster is still good, but it'll have a much harder time finding a home than Pyromancer.


Token decks can pour out the creatures, but having a small horde doesn't mean the game is won. The ever-growing token army continually ticks towards your opponent's inevitable demise, but you have to survive to that point yourself. Dwarven Prist can net quite a bit of life in the right deck, which gives you the time to build up some more for the overrun.


Instigator lies somewhere between Dragon Fodder and Mogg War Marshal. Both see play, which means Instigator may have a home. The ability to recur creatures is infinitely more prominent in Pauper than the ability to recur spells, which means that this card may be a direct upgrade for decks running Fodder. A BR Sacrifice deck, for instance, could run Undying Evil to multiply Instigator's sacrificial offerings. In such a deck, it's a step behind Mogg War Marshall, but still way ahead of the alternatives.


Hired Blade is only the second black creature with flash ever printed at common. Flash builds have always stuck to White/Blue and Green/Blue because only white and green add enough flash creatures to round at the core. Black may still be a bit shy for a traditional list, but the thought of adding black and it's wonderful array of instant removal is quite enticing.


I really like our new Packbeast. It's an Auramancer for artifacts with an extra toughness to boot. It directly competes with Sanctum Gargoyle, but being a mana cheaper can make a huge difference. It supports any trinket package, doubling the value from Aether Spellbombs and Executioner's Capsules. It's not confined to low-cost trinkets, however, which means it's more versatile and adaptable than Leonin Squire. I don't instantly see a deck surrounding it, but I feel like it has some great potential.


Neonate is somewhat basic, but it's a great first turn blocker for any control-oriented black build. Tacked on is repeatable, cheap drain that can be activated on the opponent's end step. Both of these buy you time until you can stabilize and gain control. Monoblack Control has a lot of build variations, but there's definitely some strong synergy with Pestilence here.

That's it for the noteworthy commons in Core Set 2019, at least in this humble player's opinion. While we lacked a quantity of new cards, we definitely gained some strong quality. We also had some interesting designs that I liked, such as Skeleton Archer and Two-Headed Zombie, but each fell a little short of being competitive advances. This has definitely been a good core set for Pauper, where the non-reprints had some real value to them. What kind of builds are they inspiring you to make? Was there another new common you think has some potential? Comment below, or join us in the mtgo and paper Pauper forums.