This is a special edition of All Sets Are Good. This week, to celebrate the release of Dominaria and Magic's return to its most storied plane, we're taking a look at Legends. Not only was Legends set on Dominaria, it was the set that introduced the legendary mechanic that features prominently in Dominaria.

Legends isn't a bad set given the time of its creation. Legends was one of the first Magic expansions to be designed, back when Wizards of the Coast only had five employees. Steve Conard and Robin Herbert designed the set in Vancouver after being introduced to Magic by Peter Adkinson. Steve was one of the five founders of Wizards of the Coast, and he recounted the story of Legends design for magicthegathering.com in 2002. Legends suffers from the same problems that most of the early sets fell victim to: wildly unbalanced cards, an ill-defined color pie, and trying to do too many things at once. For every Mana Drain, there's a Touch of Darkness. The ideas used in Legends, however, would go on to define the game of Magic. 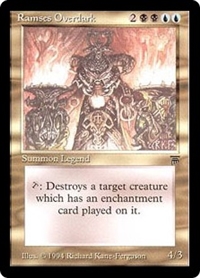 Legends was the first set to feature multicolored spells, cards that require more than one color of mana to cast. While these have become a staple of Magic, at the time this was revolutionary. Interestingly, the only multicolored cards in the set were the legendary creatures, making them stand out even more.

Poison was also introduced in Legends,though it only appeared on two cards: Pit Scorpion and Serpent Generator. This was the first alternate win condition in Magic and would go on to appear in numerous sets, most recently in New Phyrexia.

Legends biggest innovation, however, were the titular legends. These legendary creatures represented unique characters, and as such only one card with that name could be on the battlefield at a time. The Legend Rule has gone through a number of changes over the years, which I'll go into later, but the core concept of unique singular creatures in card form has persisted. Legends also introduced legendary lands representing unique locations. 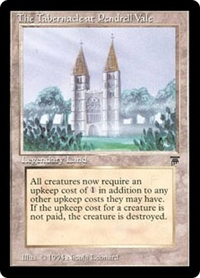 Legends brought a number of important cards to Magic that would go on to become key parts of the game. Mana Drain is one of the best counterspells ever printed. The world enchantments Nether Void and The Abyss see significant play in eternal formats. Chain Lightning is a Legacy Burn staple. The Tabernacle at Pendrell Vale, a key card in the Legacy Lands deck, is currently the most valuable non-Power 9 card in Magic, with copies selling for as much as $3500 USD following a recent buyout.

Of the legendary creatures in Legends, one cycle stands above all others: the elder dragons. These creatures would become the namesake commanders for a niche variant of Magic known as Elder Dragon Highlander (You might have heard of it.) One of these, Nicol Bolas, is the current Big Bad of the Magic story.

Being set on Dominaria, there are a number of callbacks to the people and places of legends in Dominaria:

The Good: Flavor and Story 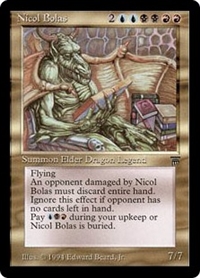 Legends didn't have a story, per se. The set was filled with fantastic places and powerful heroes and villains, but with a few exceptions the characters and settings of Legends existed in a vacuum. Many of these characters would appear in early Magic comics, but for the most part they weren't expanded upon until the Legends novels in 2001-2002. The first trilogy of Legends novels (Legends Cycle I) retold one of the old comic stories but expanded it to three novels (Johan, Jedit, and Hazezon, named for the legendary creatures Johan, Jedit Ojanen, and Hazezon Tamar). The second trilogy (Legends Cycle II, consisting of Assassin's Blade, Emperor's Fist, and Champion's Trial) focused on Nicol Bolas and his Madaran Empire. These stories, both the pre-revision comics and the Legends Cycles I and II, firmly established that all of the places and people from Legends were located on Dominaria.

Even though it lacked a cohesive story at the time of its design, Legends was one of the most flavorful sets of early Magic. The designs were mostly top-down and captured Steve and Robin's vision of a greater world of powerful individuals. Even the wonky bad cards were flavorful. How would you stop a group of creatures who could travel the open plains? You build a Great Wall. How do you turn an unfavorable battle around and save your army? You blanket the battlefield in Darkness.

Much of what we take for granted today about Magic came from Legends. The idea that a spell could be cast using multiple colors of mana? The concept of historic figures and places as cards in your deck? The idea of alternate win conditions beyond life total and decking? All because of Legends.

Do you have a particular card from Legends that you love? Have you built a The Lady of the Mountain Commander deck you'd like to share? What set would you like to see get the All Sets Are Good™ treatment next? Let us know in the comments or tweet me at @_kaburi_!

Bonus Content! All Rules Are Good: the Legend Rule

Legends introduced the Legend Rule, or at least the first version of it. The rules surrounding legendary permanents have been changed twice now. When Legends was released, the legendary supertype only applied to lands (This would later be expanded to artifacts in Stronghold and enchantments in Betrayers of Kamigawa.) All legendary creatures had the creature type Legend, which gave us such fun text as Ertai, Wizard Adept's "Ertai, Wizard Adept counts as a Wizard" because the rules and templates of the era didn't allow for Legends to have other creature types. 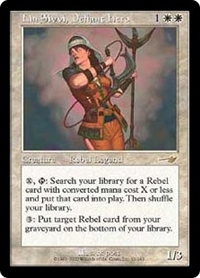 The original Legend Rule stated that there could only be one Legend or legendary permanent with a given name on the battlefield at the same time. If you drew a second copy, that card was dead in your hand—you couldn't cast it. This didn't just apply to permanents you control—if you opponent had a copy of Lin Sivvi, Defiant Hero on the battlefield, you couldn't cast your copy. This was never really a problem until the Rebel decks of the Mercadian Masques block, when games often came down to races to see who could cast Lin Sivvi first.

Interestingly, when Legends was first released, all Legends and legendary lands were immediately added to the Restricted List—the justification being that since they were unique places and people, you should only be allowed to have one copy in your deck (That policy, thankfully, didn't last very long.)