I'm excited to reveal MTG Salvation's exclusive Dominaria preview card, Final Parting! We'll examine the card itself and gameplay implications, but as the second Story Spotlight card, this set's narrative takes center stage. The Dominaria story focuses on Liliana, and Final Parting represents a key moment in her return home. But before we get ahead of ourselves, the reveal you’ve been waiting for: 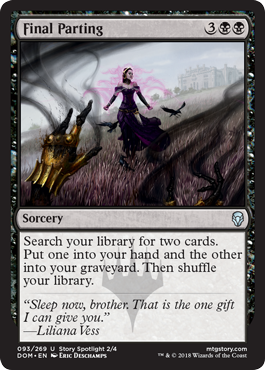 Ready for a deep dive into this critical story moment? Good.

This moment comes from Return to Dominaria: Episode 2 when Liliana finally returns to her home and confronts her brother, Josu. She's been gone almost 200 years after accidently turning Josu into an undead abomination while trying to heal his battle wounds. It's not entirely Liliana's fault; she was tricked into tapping into her fledgling necromancy by a mysterious being called the Raven Man, who has haunted her ever since.

This accident is also what triggered Liliana's Planeswalker spark to ignite. The tale is told in Liliana's Origin: The Fourth Pact, and I want to highlight a sentence from that story:

Quote from "The Fourth Pact" »

"Only one thing, in those days, had seemed beyond the reach of her magic: undoing what she had done to Josu."

This section of the story takes place decades after the Great Mending, when Liliana has lost most of her power and virtually given up hope on saving Josu. However, this subtle plot thread has remained alive since Magic Origins. A return to her home plane after suffering defeat against Nicol Bolas confronted Liliana with a harsh truth: Josu was still around.

Even worse for Liliana, one of her demonic masters, Belzenlok, has made Josu a lich lord in his undead army. It's also worth noting here that it was Nicol Bolas himself who brokered Liliana's pacts in the first place. I have long considered the corruption of Josu to be an important moment for Liliana's future, and Dominaria's story has already revealed it to be a lynchpin in plots beyond Liliana's control.

Forced back to her childhood home, Liliana actually shows emotional maturity and admits that she was partially responsible for her brother's undead state. Her impatience and arrogance made it easy for the Raven Man to trick her. Armed with the power of the Chain Veil, she is finally prepared to confront her brother and accepts that the only way to save him is to undo the magic keeping his body animated. For the first time in her life, Liliana sends a zombie to eternal rest. Final Parting captures this moment, with the flavor text echoing Liliana's somber acknowledgement of this outcome.

The art, however, tells a greater story...

Here's the thing: Liliana made a hard decision to put Josu to rest, and it didn't just have to do with her emotional health. Using the Chain Veil leaves her drained and unable to effectively cast spells for a bit. Without the help of Nissa, Chandra, and Jace, she can't defeat Belzenlok without the Veil. Thus, unmaking Josu makes it that much more difficult for her to kill Belzenlok.

Liliana surmises that this has been Belzenlok's plan the whole time. By turning Josu into a lich, he safeguards himself in case Liliana defeats her brother. And who convinced Liliana to turn Josu's life upside down in the first place? The Raven Man. And who put Liliana and Belzenlok together for a pact? Nicol Bolas. Liliana's whole life has been manipulated by others.

Vanquishing Josu plays right into Belzenlok's (and possibly the Raven Man's and/or Bolas's) plan. In a cunning game of chess, Liliana chose to take the bait. It's a precarious move. Will she be able to find another way to kill Belzenlok, or will her ambition once again get the best of her? 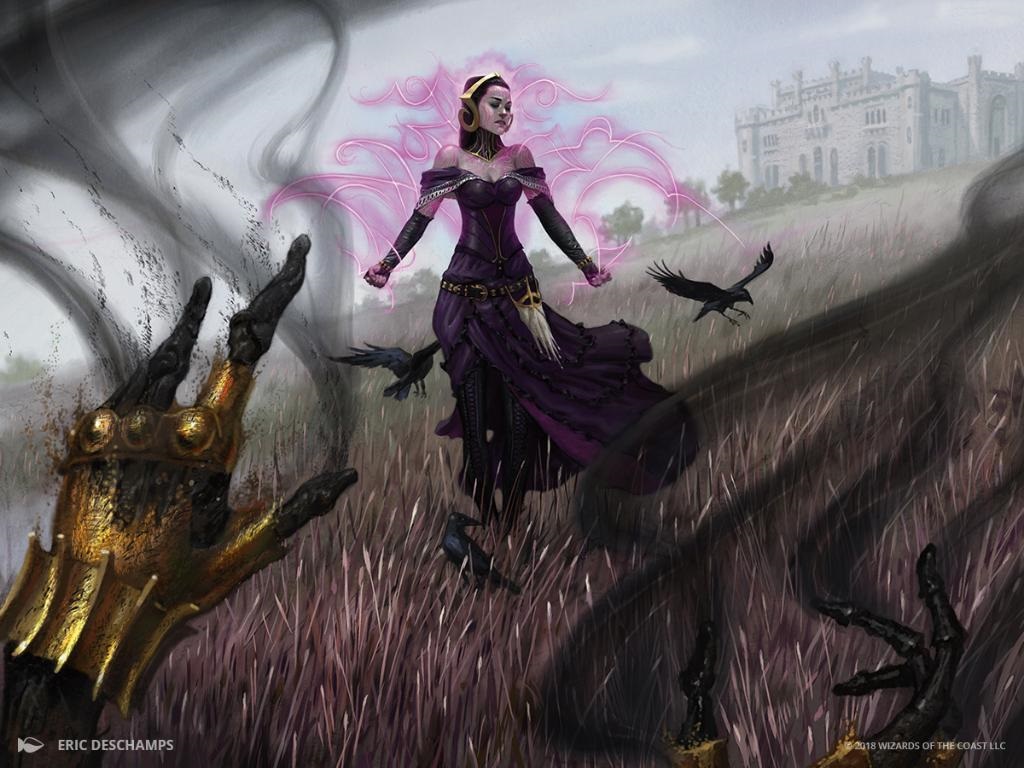 The art paints an ominous future for the Benalish necromancer. We can see Josu's disintegrating hands in the foreground and the Vess mansion in the background, but the juicy elements are surrounding Liliana in the midground.

First, we see three ravens circling Liliana's body. The motif is clear: the Raven Man is involved with this moment in the story. It's a signature we've seen time and time again throughout Magic: The Gathering's history. When Liliana and ravens are in the same scene, the Raven Man is just out of view pulling a string. As the individual who first convinced Liliana to try to save Josu with her necromancy, it's not surprising that the Raven Man would help manipulate his final re-death too. We also learned that Belzenlok was only able to turn Josu into a lich because of what Liliana did to him. Is the Raven Man in cahoots with Belzenlok? The art implies a link.

Second, this is the final tutor in a four-card cycle that show Liliana's demons. Kothophed showed up on the classic Demonic Tutor. Griselbrand appeared on Magic Origins's Dark Petition. Razaketh's Rite shows Razaketh (duh) using his blood magic. So where is Belzenlok on Final Parting? Check out the purple magic erupting from Liliana. While it superficially mimics her tattoos, it's specifically forming horns and wings around her. Here she's enacting Belzenlok's will. The implied Belzenlok here speaks to his shadowy work altering Dominaria's history in order to accumulate even more power. This seems like an omen that won't bode will for Liliana's future in this set.

Yes, they stapled Diabolic Tutor and Entomb onto the same spell. That's sweet. In the right deck, this tutors for two cards for five mana. It's not likely to break Legacy or Modern, but there's some interesting potential in Standard with The Scarab God and God-Pharoah's Gift. Commander and Brawl fans can also rejoice in a tutor that carries bonus value for your graveyard deck.

It's pretty cool that the necromancer's tutor spell also plops a card into your graveyard. The mechanics are also symbolic of Liliana's role in this story moment. You tutor up a card in the traditional demonic pact style for Belzenlok, but you also "put Josu to rest" by sending a second card to your graveyard. I love when simple mechanics can so elegantly tie to flavor, and Final Parting is a refined package of name, art, flavor text, and mechanics.

What's next for Liliana in the Dominaria story? There are two more Story Spotlights to go and one devious demon standing in her way. I expect exciting things from the next two entries to this cycle.

Until then, feel free to drop your thoughts about Final Parting in the comments below or hit me up on Twitter @_SEV8. Enjoy the rest of Dominaria, fellow Planeswalkers!