Sign In Register
2019 Holiday Exchange!
A New and Exciting Beginning
The End of an Era
For future readers, this article was posting on April 1st, 2018 - April Fools day

Today is Easter to many, and families are gathering around the table to enjoy bountiful meals all over. But what kind of meals do they cook in the Magic multiverse? What strange medleys can be found in these fantastical worlds? It just so happens that today's exclusive spoiler announcement answers those question!

As the legend goes, Asmoranomardicadaistinaculdacar (Azmor for short) was a powerful wizard who summoned a Lord of the Pit named Vincent to perform a powerful task for her. Such a request requires an offering (traditionally a sacrifice for him to eat), but her offering scampered away before she could give it to him. Vincent decided to eat her instead, but she quickly gave him a counteroffer. She would be his head chef for seven years and seven days, cooking him a different meal each and every day in return for sparing her, and at the end of the seven years she would be free. Vincent agreed, but with the addendum that if he ever grew bored with her meals he would simply eat her instead.

So for seven years and seven days Asmor fixed the most inspiring meals the underworld had ever seen, and Vincent was utterly satisfied with each and every one. At the end of her debt, she was freed and wrote down her works in The Underworld Cookbook. She made twenty copies, but only two of them sold and she abandoned the project. She ordered two imps to burn the remaining copies, but the line to the incinerator was too long. Instead, they used a garbage chute that lead to the overworld. From there her book traveled the multiverse and became a mainstay of noble cuisine everwhere.

Now, these famous recipes can be had in our world too! That's right, the creative team at Wizards has made this legend a reality, and The Underworld Cookbook will hit store shelves on July 13th. It will be released to bookstores and gaming stores alike, but will initially be a limited print run, so be sure to grab your copy quickly.

But wait, there's more! We can't leave you with such a small appetizer of previews, though. Wizards has also graciously given us two of the book's recipes for your previewing pleasure today. Both look absolutely wonderful, and I'm sure your Vorthos tastebuds will salivate at these recipes! 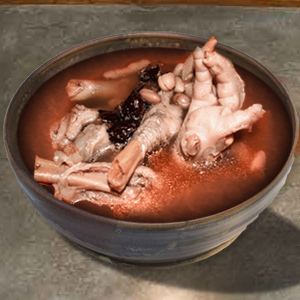 The Sarpadian breed of thrulls have a juicy, succulent meat that can be delicious when prepared correctly. Without correct procedure and spicing, however, they can be slightly gamey. They are in abundance in the underworld thanks to their low maintenance and very rapid breeding. A single breeding pit can produce more than two dozen thrulls a day, making them a cheap and bountiful meat. While many creatures in the underworld eat them uncooked and unspiced, they can easily be made into a much more flavorful meal for the more sophisticated palette.

Thrulls are available at most underworld markets, fresh or frozen, and can be ordered by your local butcher. The more evolved, intelligent thrulls of Sarpadia can be found in many specialty markets, but this recipe is best used with the common place thrulls bred in local breeding pits. If you can find fresh thrull, it's best to have your butcher piece it out for you, given their nonuniform shape. Otherwise, see "How to Cut Up a Thrull" in chapter one. Alternatively, you can simply brown the entire thrull, put it into the stew whole, and remove it later to pick off the meat. 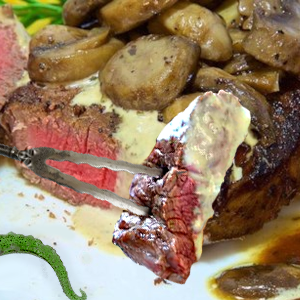 Kavu meat is known the multiverse over for its marbling characteristics and naturally strong flavor, tenderness, and juiciness. Few meats come close to the perfection that is a well cooked kavu steak. It can be pricey, given the kavu's limited population, but it can also create some of the most elegant dishes.

Although kavu steaks can be made simply, proper cooking techniques are absolutely imperative to getting the most out of their potential flavor. Overcooking or adding the wrong spice profile easily degrades the inherent flavor.

The following recipe pairs the kavu's naturally bold flavor with an equally bold, rustic wine. Combined with mushrooms and thallids, this dish has a strong earthy aroma with a delectable taste any palette can enjoy. The recipe is simple, but very precise. Do exactly as the recipe instructs and you will have one of the best meals of your lifetime. This is an excellent recipe to start with if you haven't prepared kavu before.


Make Sure to Grab a Copy!

The Underworld Cookbook releases July 13th, 2018. There's only a limited print run, so make sure to ask your LGS about it, and preorder your copy as soon as possible. Players have been asking about for this for years, and with the return to Asmor's home plane of Dominaria, it's finally a reality. This will be a highly sought after product, so don't expect copies to last long. I know I'll be grabbing myself a copy!