This works for every set! Even Saviors of Kamigawa.

Saviors of Kamigawa: The Bad

Before we talk about why Saviors of Kamigawa was good, we need to talk about what went wrong. Like we saw last month with the Mercadian Masques block, Champions of Kamigawa block was the intentionally underpowered follow-up to one of the most dangerously broken blocks in Magic history: Mirrodin, Darksteel, and Fifth Dawn. Saviors was weak even by Kamigawa standards.

Saviors is also a victim of "third set syndrome." Since the inception of the block model, Magic has struggled with trying to make the third set of each block relevant. We saw this last month with Prophecy, which was a complete mechanical disconnect from the rest of the block. Saviors wasn't that dramatic a shift, but it did try to bring in a "hand size matters" theme in addition to the other mechanics carrying forward from the previous Kamigawa sets. The result was a muddled set with uninteresting new keywords. 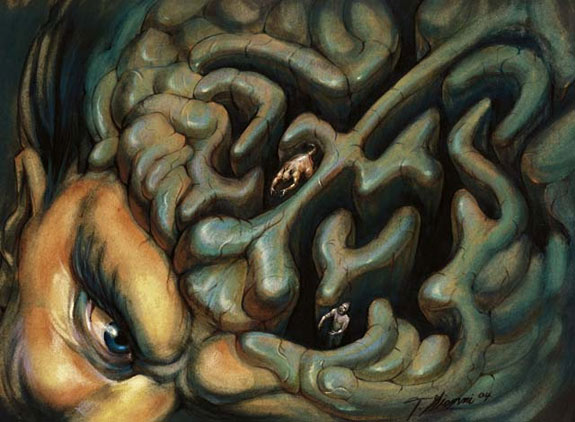 Kamigawa block is one of my favorite stories Magic has ever told. The three Kamigawa novels are spectacular; if you haven't had a chance to read them yet I highly recommend them. Unfortunately at that point in Magic's history, the story was divorced from the cards, so very little of the story of Saviors actually makes it onto the cards.

That's not to say the set was a flavor miss. Saviors is dripping with flavor. The flip cards that become enchantments, such as Kuon, Ogre Ascendant, perfectly capture concept that a mortal achieves enlightenment and transcends the physical. The artwork in Saviors is breathtaking, ranging from realistic pieces like Maga, Traitor to Mortals to abstract pieces like Meishin, the Mind Cage.

Saviors of Kamigawa was packed with mechanics. Arcane spells and "spiritcraft" (abilities that trigger off casting spirit or arcane spells) carried forward from the earlier sets of Kamigawa block, as did soulshift, splice onto Arcane, flip cards, and the legendary theme. Because Saviors is a small set and had its own mechanics to showcase, most of these returning mechanics showed up in lower numbers. For example, there were only seven cards with soulshift and only a single cycle of five flip cards. 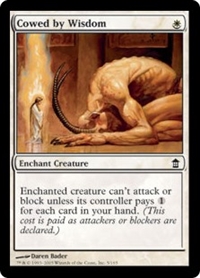 Saviors introduced four new mechanics. The major mechanic for Saviors was "wisdom," which had spells and creatures that get better the more cards you have in your hand. The ability word sweep allows you to return some number of basic lands of the appropriate type for the color of the spell to your hand to increase the effect of the spell. This also helps maintain a large hand size to take advantage of the wisdom cards. While a few cards had referenced cards in hand or hand size earlier in Magic's history, Saviors broke new ground by featuring this as a core mechanical theme.

Channel was another ability word introduced in Saviors. Channel appears exclusively on Spirit creatures with enter-the-battlefield abilities; the channel ability lets you discard the card and pay a cost to generate a smaller version of the enter-the-battlefield effect. That channel appears only on spirit creatures is no coincidence. This was done to tie in to the soulshift ability, which lets you return Spirit cards from your graveyard to your hand. Channel also allows you to generate a spell-like effect without actually playing a spell, which ties in to the final new mechanic in Saviors: epic.

Epic is a keyword ability that appears on a cycle of five rare spells. Epic captures the flavor of casting a legendary sorcery: once you cast a spell with epic, you cannot cast other spells for the rest of the game. That drawback seems steep, but you get to copy the epic spell for free at the beginning of each of your upkeeps.

Despite its reputation for having a low power level, Saviors had a number of cards that made an impact on Standard. Ebony Owl Netsuke spawned an entire deck: Owling Mine. Two versions of Owling Mine made it to the Top 8 of Pro Tour Honolulu 2006, one from Tiago Chan and another from Antoine Ruel.

The Owling Mine deck uses Kami of the Crescent Moon (another Saviors all-star) and Howling Mine to fill up its opponent's hand, which then triggers Ebony Owl Netsuke. A strong suite of bounce (Boomerang and Eye of Nowhere) and Remand throw even more cards into the opponent's hand. Sudden Impact then leverages that massive hand size as a finisher.

The most enduring card to come out of Saviors is Pithing Needle. A staple card in every format it's been printed in, Pithing Needle was a completely unique effect when it debuted. Pithing Needle is an important answer that can be used in any deck.

Erayo, Soratami Ascendant is the one member of the flip legend cycle that made a splash. Erayo's Essence, the flip side of Erayo, was so powerful in Commander the card was banned as a commander (back when cards could be banned as commanders) and eventually was completely banned.

For all the talk about how Saviors of Kamigawa was underpowered, Saviors cards took a starring role in a Pro Tour Top 8 deck, and one ended up banned in Commander. The flavor, like all of Kamigawa block, was fantastic. Overall, it was a good set.


Do you have a particular card from Saviors that you love? Have you built a Maga, Traitor to Mortals Commander deck you'd like to share? What set would you like to see get the All Sets Are Good™ treatment next? Let us know in the comments or tweet me at @_kaburi_!
Posts Quoted:
Reply
Clear All Quotes
Read Next