Quote from "The Flood" »

The Immortal Sun looked like nothing more than a strange decoration in the floor, but it felt . . .
it felt like a mirror, not a light. The light was his.

Kumena stepped onto the Immortal Sun and took that power, his power. The ground shifted beneath him, and his perspective shifted with it.

With Ixalan behind us and Dominaria fast approaching, I'd like to take a few moments to appreciate what Ixalan was about. Before it began, many were fearful that Ixalan would be about the age-old schoolyard question, "Who would win, dinosaurs or pirates?" I contested that such fears were unfounded. (Indeed, I feel judging any story by the existence of any specific fantastical element is poor practice.)

So what is Ixalan about? This is a different question than, "What happens in Ixalan's Story," though they are connected. Yes, what happens is a conflict between pirates and dinosaurs (and vampires and merfolk), but what it is about is something far deeper and universal.

First a note: Through the Magic Story Podcast, we have official word from one of the authors, Alison Luhrs, that a theme of Ixalan is desire. Without getting too into nondiegetic sources, one of the key things to get out of this is that not only does the Immortal Sun provide something that each party desires, but it is also an externalization of each character's internal desires. 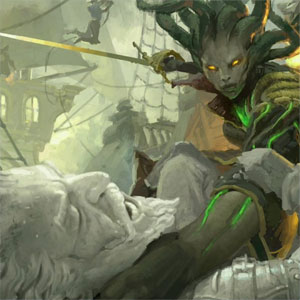 Let's explore what those desires are for our main characters, and perhaps we will be able to uncover, under all the dinosaurs and magic and cutlasses, what the story is about.

We saw Vraska in her last appearance as a remarkably ambitious assassin who happened to be a Planeswalker; her baring on the plot was less than extraordinary. Now we see that, much to her chagrin, this is how the plane of Ravnica views her as well; the gorgons were seen as lesser even amongst the Golgari. On Ixalan she was free of that prejudice and had room to realize her potential as a leader, a champion of the downtrodden, a pirate captain. A captain so talented and inspiring that, if had things had transpired diffrently on the other side of the fourth wall, hew crew would have taken the city of Orazca itself.

"Wait." Vraska's brows were knit with concern. "How will I know my memories are real when I get them back?"

Jace moved to stand across from her. "I'll call you by your title when I see you next, before I return your memories."

Happiness tugged at the lines of her eyes. "That will work."

Despite Bolas getting the Immortal Sun, as his proxy on Ixalan, Vraska gets the short end of the deal. Through self-sacrifice, she lost the memories of Jace. While these were not the totality of her development, perhaps not even a sizable chunk, their bond over past trauma was, and I mean this without irony, the greatest treasure to be found on all of Ixalan. The plan is for this loss to be temporary, that it is a means of sabotaging Bolas, but Vraska must know that any plan conspiring against Bolas has chance of failing. If all goes well, then she will be a hero in one of the Multiverse's greatest conflicts, if anything fails... well, it's a calculated risk, and a necessary one. 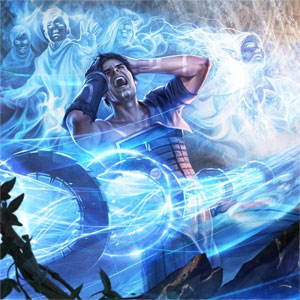 Flood of Recollection by Magali Villeneuve

Love him or hate him, everyone had opinions about Jace. There were, and indeed likely are, plenty of people who heard Jace was going to be in Ixalan and immediately checked out. Jace's history has been told in many parts over many years, but changes in Magic's story medium ensured there was no singular chronicle a new reader could be pointed toward to understand him. Now, in many ways, there is.

In Ixalan we see a Jace free of all the awful things that have happened to him, an image of his personality untainted by past trauma. Then, with the return of his memories, we see him with ALL his memories for the first time. How the Jace we grew to know throughout Ixalan deals with these memories provides a synthesis that hopefully gives both new readers and seasoned Vorthoses an unprecedented look at who Jace is.

Quote from "The Talented Captain Vraska" »

"You really don't remember anything, do you?" she asked.

He gave Vraska a bittersweet look and echoed her own words: "My past is part of who I am, but it is not who I am today." 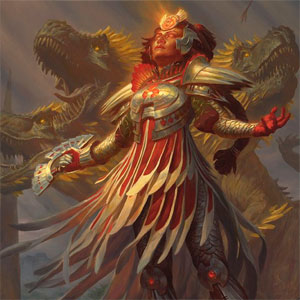 Huatli has always seen herself as the warrior poet, others see her as this as well, but to truly earn the title she is given the task of finding Orazca. Her story is interesting in that on one level she knows precisely who she is, as do many others; she is the warrior poet. This never changes. She never realizes she is or should be something different. She tells and collects stories, poems, histories. What she comes to gain is a greater understanding of the duty she has as this storyteller "who tells the stories." It is a present-oriented view of the saying "history is written by the victors" (Consider the whitewashing and sanitization of the real world counterparts to the Legion of Dusk.)

In A Question of Confidence, she gives a child the advice, "If you think your work isn't ready to share, don't try to make it good. Try to make it honest." This is the advice she remembers at the end; she will not tell the version of the story the emperor wants and she will not paint her people as the sole heroes and erase the heralds. When the emperor, who would bestow her with the helm and official title of warrior poet, tells her to do that, she declines risking said title. She would rather embody who she is than betray it for a title. In doing this she is rewarded with an infinitely more vast sea of stories to learn, tell, and pass down.

Quote from "Who Tells the Stories" »

"But I'm the warrior-poet. I'm meant to stay here."

"You're meant to collect stories and histories!" Inti said, his mouth full of squash. "Why would you want to only tell stories from here when you can go someplace else?"

Angrath wants to go home, he misses his kids, and he will do anything to see them again. He has nothing to lose, and there is a school of thought, one I do not agree with, that says someone shows their true colors when in a hopeless, backed-into-the-wall situation. There was a lot of speculation that his monstrousness was a result of his situation; that before this, and after he was freed, perhaps he wouldn't be so bad. While his reunion with his daughters is tearjerking, I find it telling that his first response upon realizing he was free did not appear to be elation, but spite and hate, as though he was more concerned with being able to leave Ixalan than being able to go home. Until we see more of him and his plane I don't think there's enough context to analyze this moment. I can't help but wonder how would we see his story on Ixalan differently if it were told from his point of view rather than Huatli's.

Quote from -"Wool Over the Eyes »

Two minotaurs glanced up from their anvils. They were tall like their mother had been. They wore bulky leather aprons, and their horns were adorned with the jewelry worn by unmarried women of their age.

Their eyes went wide. The one on the right snorted in shock. The other's ears stood up in surprise.

The one on the right sniffed the air and trembled with emotion. "Father?" 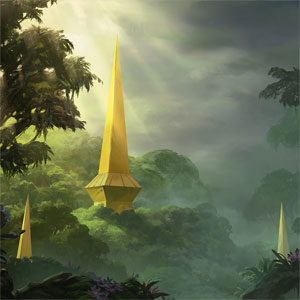 If we take self-discovery as Ixalan's treasure, we find that that theme of "desire" is far deeper than a quest for a big golden trinket. Yes, only Bolas got the Immortal Sun, and only the Sun Empire claims Orazca, but Angrath still gets to go home, Jace regains his memories, Huatli feels fulfilled as warrior poet.

Individual characters aside, Ixalan's own identity also plays a role, if considerably more abstract. The Mesoamerican cultures Ixalan was inspired by have been defaced and destroyed by European invaders we now call conquistadors, and so the vampires function as a metaphor for the threat that is destruction of identity on a societal level. If the finding of Orazca is representative of Ixalan's true past coming to light, then it is fitting that with it comes the return of Saint Elenda and the reveal of how obfuscated the vampires of Torrezon's own history has become. Using everything we've gleaned so far, it becomes much more obvious why the conflict's instigator is who they are.

As the story reached a head in Rivals of Ixalan, we even saw a fascinating, frustrating study of identity and absolute lack of self-discovery. Azor was certain he was a law bringer, that this was his purpose, duty, and talent. And yet, as the chapter is titled, the "Arbiter of Law" left chaos in his wake. Azor's true self is not a lawbringer no matter what he may say or what stories he might tell the inhabitants of a plane. Magic has a trend of its eldest characters being the most deluded, self-certain, and wrong. He tells himself that story, his legend of bringing peace and justice to countless planes, and would tell it to others. We have seen that those who listen, like his followers at the fallen Palace of Justice, find themselves lost as well.

If the Guildpact and Ravnican society survive Bolas's plans, it will be in spite of Azor, not because of it (He and Urza would have a lot to talk about.) His exile at the hands of his own creation serves as a fitting end.

There's a lot more to discuss and analyze about Ixalan's story. This is what stuck out to me, but please tell me what you got from it. What did you enjoy? Leave a comment or tweet at me at @Kaus_Jason.