It’s easy to take nature for granted. Every moment of your life you are surrounded by nature. There is nowhere you can go to escape it. It’s just there, so your mind often filters it out.

Nature is often taken for granted when building fantasy worlds. Authors love characters and narratives and human things. The nonhuman things, the verdant, burgeoning, snarling things of nature, are also important tools for immersion. Magic: The Gathering learned this early. Focus on creatures, environments, and cultures; an audience that can see the forest for the trees will be more invested in your game.

Today I want to walk through the ways in which ecological-minded worldbuilding can create more immersive, believable worlds for fantasy stories. I’m going to focus on three axes along which ecology can build a world: creating fantasy creatures, having your people interact with their ecosystem, and environmental storytelling.

Balance the Familiar and the Fantastic

Fantasy straddles two opposing forces of the human psyche: the comfort of the familiar and the desire for novelty. Ecosystems are a pervasive way to negotiate this tension in fantasy stories. Worlds need to be populated, and filling them with things that look and behave like things in the real world help comfort an audience. At the same time, the flora and fauna that populate a world can inspire and excite an audience with something they’ve never seen before.

How heavily an ecosystem swings in either direction has a large influence on the moods a world inspires. In Magic, Innistrad is mostly populated by humans with farm animals such as sheep, horses, and oxen. It’s high in realism, which helps contrast everyday life with the vampires, zombies, and other monsters of the night. On the other side of the spectrum, Mirrodin’s rusted trees and razor fields make it feel alien. Metallic organisms skitter and clang; it’s an uneasy world filled with unrest. 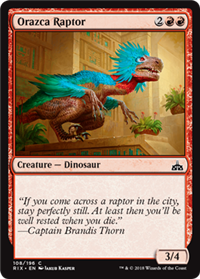 A clever, and fancy, girl. 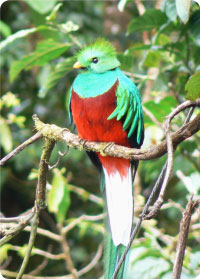 Related to familiarity and novelty is trope space. When a world builds on something familiar, the audience is going to have a set of expectations for what that world contains. A plane can embrace these tropes or invert them to elicit surprise. Even on a small scale, imbuing trope space with both the familiar and the novel can heighten the audience’s appreciation for that world.

A fantastic example of this kind of detail exists in Rivals of Ixalan. Orazca Raptor may seem like just another feathered dinosaur at first, but its coloration is replication a real creature: the resplendent quetzal. Quetzals are auspicious dinosaurs in Mesoamerican cultures, symbols of wealth and freedom. Their feathers were often used in clothing of the elite classes. Orazca Raptor recreates the familiarity of the quetzal in the novel form of a nonavian dinosaur. It’s associated with the golden city of Orazca, filling the similar role as a symbol of wealth. By playing in this space, Orazca Raptor immediately informs us why the golden city has been sought after for centuries.

At the other extreme lie monsters beyond anything the human mind can recognize. Embracing the alien, the Eldrazi are the perfect representation of organisms born of the void. They are from the Blind Eternities, the non-space without time nor physics that separates the planes of the Multiverse. Playing with form in almost non-organic ways, the designs of Eldrazi help sell them as invaders to Zendikar (and later Innistrad). They push to the brink of un-ecology. Thanks to their contrast with the familiar and trope-embracing people they encounter, their theme of unfathomable destruction powerfully resonates.

With help from a human element, any well-designed ecosystem creates meaning in a world that is larger than a two-inch square on cardboard.

Human elements are just as important in a fantasy ecosystem as anything else; humans are animals. For the purposes of a fantasy world, a “human element” applies to any sapient peoples regardless of species. But no matter if they’re human, goblin, or elf, they’re going to have to interact with the other organisms in their world. 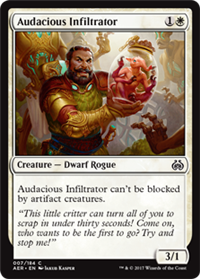 Say hello to my little friend!

It’s less important that fantasy worlds are realistic than they are believable; a little verisimilitude goes a long way. A world needs to feel lived in, and the right ecosystem helps sell that feeling to an audience. Cultural elements of the people are going to be influenced by the forms of life around them. Let’s take a deep dive into the city of Ghirapur on Kaladesh to see how these details can manifest.

No animal exemplifies this relationship better than the gremlin. Like cockroaches, gremlins didn’t evolve to live in the big city. But just like cockroaches, the bounty of food and lack of predators made the city a perfect environment for gremlins to inhabit. While the technocratic city buzzes and whirs with the power of aether, gremlins act as pests that corrode metal and slurp up aether from the machines that run the city. The people of Ghirapur are at war with these vermin, turning their innovative genius towards traps, containment, and extermination. This is a relationship that fuels the magical plausibility of Kaladesh and provides ample opportunities for flavorful cards like Release the Gremlins and Caught in the Brights.

There are also plenty of anthropological details built into the world of Kaladesh. For example, Ghirapur has a street called Giant’s Walk that runs through the entire city so that migrating giants can follow aether trails without trampling buildings and citizens. It goes even deeper than that, however: 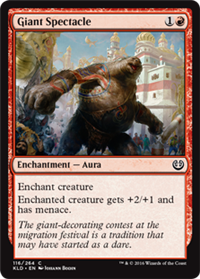 You gotta fight for your right to migrate.

Quote from Giant Spectacle flavor text »
“The giant-decorating contest at the migration festival is a tradition that may have started as a dare.”

Because of one single organism in the environment, an entire festival was created. That’s the kind of worldbuilding detail that takes a fantasy realm from cool to immersive.

It’s important to remember that it’s a relationship between your ecosystem and the people that inhabit it. The wildlife doesn’t just impact the culture of your people, but their culture in turn impacts the wildlife. This goes beyond tired “civilization is bad!” tropes. One flavor nugget I enjoy from Kaladesh is the card Salvage Scuttler. Check out its flavor text:

Quote from Salvage Scuttler flavor text »
“A hermit crab goes through many shells in its lifetime, and not all are natural in origin.”

While the technology of Ghirapur has had to account for the other organisms on Kaladesh, those organisms also interact with technology in unique ways. The existence of giant hermit crabs implies the existence of giant snails (ecological depth beyond any written detail!), but just like hermit crabs in the real world, these crustaceans sometimes inhabit discarded refuse instead. The biological and the anthropological are in concert here, revealing an intricate world filled with relationships.

The interplay of people and the world around them creates a believable experience for an audience. Once the ecological boundaries are set, the participants are free to mingle in unique and expressive ways. All that interaction makes it inevitable for stories to emerge from such action.

Use Ecology to Tell a Story

Stories don’t exist in a vacuum, and neither do settings. Just like the organisms that interact in a fantasy ecosystem, a story and the setting in which it takes place communicate with each other. Moments in a story can determine what kind of traits a setting needs, while details in a setting inform the kinds of stories that take place there.

This relationship is broad. Most generally, it means an ecosystem and a story should resonate with the same themes and motifs. Remember when I talked about how the Eldrazi are so fantastical that they’ve become alien? That decision enhances the Battle for Zendikar story’s theme of rallying against a cosmically unfathomable threat. The same weirdness in Shadows over Innistrad and Eldritch Moon reverberate with Innistrad’s existing horror ethos.

More specifically, ecosystems can dictate story events. We can see this best by looking at the two Tarkirs that are present in Sarkhan Vol’s memories. In Khans of Tarkir, Ugin and his progeny are extinct. The lack of dragons has resulted in a dying world where warring peoples fight over the scraps that remain. In Dragons of Tarkir, however, the survival of the dragons leads to their rise as the dominant people on the plane.

The change of a single organism in the ecosystem ends up having massive ramifications for Tarkir. Cards from both sets demonstrate these changes with art, names, and flavor text. One example exists on Alpine Grizzly from Khans of Tarkir and Dragon-Scarred Bear from Dragons of Tarkir: 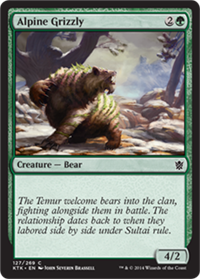 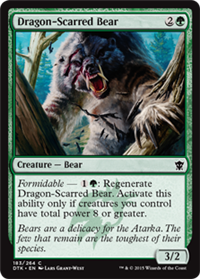 The pain is unbearable.

Quote from Alpine Grizzly flavor text »
“The Temur welcome bears into the clan, fighting alongside them in battle. The relationship dates back to when they labored side by side under Sultai rule.”

Quote from Dragon-Scarred Bear flavor text »
“Bears are a delicacy for the Atarka. The few that remain are the toughest of their species.”

Flavor text on two commons ends up telling us a lot about the two timelines. First, the difference tells us about an ecological change due to the presence of the apexiest of apex predators: dragons. No dragons? Bears everywhere. Dragons? Ursine steak is on the menu. Second, we get an anthropological look into the clans. The Temur see the bears as equals, living in harmony with nature. The dragons see the bears, and almost everything else, as food, ruling the Qal Sisma Mountains as tyrants.

As stories march forward, the worlds they take place in shift along the way. Ecosystems are useful for showing those kinds of changes while also supporting the themes present in a story. Scary stories have scary monsters wrought by violence. Fairy tales often have playful, and at worst, mischievous, critters. In turn, scary monsters beget scary stories; goofy goblins beget goofy stories seasoned with comedy. The organic systems present in a fantasy world are quite literally a key part in letting stories become living, breathing entities for audience to enjoy.

Seeing the Forest and the Trees

There are many ways to approach worldbuilding. People, places, things, and ideas support the integrity of a setting so that audiences believe in the story that happens there. Ecology is a major lens through which worlds can be built, and I hope today’s article helped explain how and why.

For fantasy in particular, settings need to embrace novel forms and functions, but that comes at the risk of alienating the audience. Good ecology will be rooted in the real world while still allowing things like unicorns and leviathans to exist. People are animals too, and how they interact with their ecosystem is important. This is where ecology intersects with culture, religion, traditions, diets, and more. The more you think about how your characters live in your world, the more real it will seem. Finally, organisms are visceral beings. What they look like, how they behave, and who they interact with feeds into the tone of a story. These factors can even become major plot points that leave characters, and the world around them, changed forever.

Magic’s Multiverse contains countless planes, each with their own unique ecosystems. If you interrogate how those ecosystems work, and why, you can learn incredible things about the people and stories that exist there. The past, present, and future of fictional worlds are swimming in their seas and crawling through their caves, and soaring in their skies.