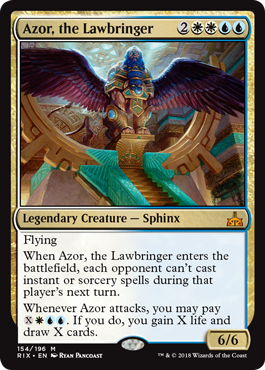 Rivals of Ixalan preview season has gotten off to a bang, bringing us a host of exciting new cards to build around. While the Elder Dinosaurs are massive, one legend in particular was an unexpected surprise: Azor, the Supreme Judge, founder of Ravnica's Azorius Senate, and writer of the original Guildpact, has been hanging out on Ixalan!

To celebrate this Revelation, we've let Azor hide out in our Deckbuilder a few weeks early. Thus, we're issuing our first Deckbuilder Challenge! Build your best Azor Commander deck, share a link to your deck on Twitter or Facebook using #MTGSDCAzor, and on Friday, 12 January, at midnight EDT the deck with the most upvotes on MTGS wins!

It wouldn't be an Azorius Challenge without rules:

That's all the boring legal stuff. Vorthos extraordinaire Jay13x has put together his own Azor deck to inspire your creations, so take a look at it and then get to building!