In the midst of the Iconic Masters and Unstable excitement, a handful of Rivals of Ixalan cards were previewed. Before we get into Rivals preview season proper, let's take a quick look at what's been revealed so far and speculate a little. 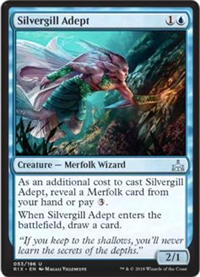 First up is Silvergill Adept, a reprint from Lorwyn. This is the promo you'll receive for attending the Open House event at your local game store. It's also the first reprinted merfolk card to show up in the Ixalan block. I feel it's unlikely we'll see more though, as most pre-Ixalan merfolk have names and/or abilities that don't mesh well with the flavor of the River Heralds.

Next is Ghalta, Primal Hunger. This is the promo you'll receive for attending the Store Championship. It's a nice big beater, but the key thing to note is the creature type, Elder Dinosaur. The Polygon article mentions six Elder Dinosaurs in Rivals. Thanks to Tetzimoc, Primal Death, I think it's safe to assume that there will be one in each color and then most likely a Naya-colored Elder Dinosaur. Maybe don't finalize your Gishath, Sun's Avatar Commander deck just yet. It seems unlikely that we will see any other dinosaurs in blue or black, as Wizards won’t want to dilute the tribe among the colors.

Storm the Vault//Vault of Catlacan confirms the return of transform lands. The fact that this card is blue/red despite cards like Deadeye Plunderers and Revel in Riches pushing Blue/Black as the treasure archetype in Ixalan suggests we are getting only enemy color pairs for these lands. As for the other transform lands, Green/blue would be related to the River Heralds, White/Black to the Legion of Dusk, Red/White to the Sun Empire, and Black/Green is potentially linked to Vraska. 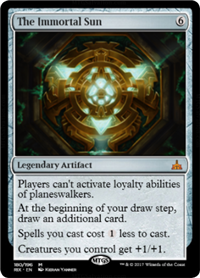 The Immortal Sun is a hate card, anthem, mana ramp, and card advantage all in one package. It's powerful, but not broken like Emrakul, The Promised End. We'll see if its mana cost is too prohibitive for Standard.

Evolving Wilds is back with new art for the players who care about that sort of thing.

Brass's Bounty is another red card that makes treasure tokens. Ixalan only had three red cards that created treasure tokens, so it looks like Rivals is expanding this theme.

Captain's Hook is a welcome pirate trope. If it cost one less to cast, it would probably be constructed playable. As it stands, the Buy-a-Box promo is probably not quite good enough to affect Standard. I'm okay with everyone owning a fancy copy of this card.

Vona's Hunger gives us our first look at ascend, the mechanic that creates the City's Blessing token that was revealed with the other Friday Night Magic tokens. Ascend replaced the monarch mechanic that was stolen for Conspiracy: Take the Crown. There are some noticeable differences between the two of them. Unlike monarch, having the city's blessing on its own does not give you any bonuses. It also doesn't appear that the city's blessing can be removed, so the token is more like a Planeswalker emblem. I think this is much better suited for a two-player game as opposed to a multiplayer game like Conspiracy.

I'd like to end with a note regarding Vraska, Scheming Gorgon. It is unlikely that we will see a mono-black version of Vraska in Rivals, main set. Hour of Devastation had the mono-green Nissa, Genesis Mage in a Planeswalker Deck immediately after the green/blue Nissa, Steward of Elements was printed in Amonkhet. I wouldn't read into the color shifts that are taken to accommodate products like the Planeswalker Decks.