No need to be coy about the recent Commander announcement: until the next banned list announcement on January 15th, most silver-border cards are legal in Commander. Other than a short list of still-banned cards, cards from Unglued, Unhinged, Unstable, the Wizards of the Coast holiday promos, and the HASCON promos are now available for Commander shenanigans.

That doesn't mean throwing rules, the social contract, and general restraint out of the window.

The announcement also came with advice. There's a list of cards to be careful with lest ye lose your friends. The Unhinged cards with the gotcha mechanic are easy to abuse, so don't. Spike, Tournament Grinder requires everyone to agree on the scope of her tutor ability before the game starts, so don't expect to just sit down and slam Emrakul, the Aeons Torn every game. Contraptions use their own deck, so they don't count towards your 99.

Today I want to expand on those cautionary notes. This is a big shift in how Commander can (legally) be played over the next six weeks, and I want everyone to be prepared for how to best manage their fun. This article will list plenty of DOs and DON'Ts for played with silver-border cards in Commander. 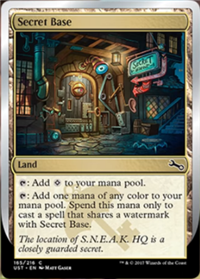 While silver-border cards are now legal in Commander, that doesn't mean everyone is going to be happy about it. Some groups may have been fine with them already, but you won't always encounter players that are comfortable with the amount of extra these cards bring to Magic: The Gathering.

If you're going to be playing with silver-border cards, make sure everyone knows it. The goal of Commander is for a group of friends to all have fun. Don't ruin other people's fun by playing with cards that make the game itself uncomfortable.

Even if everyone thinks some silver-border cards would be fine, not everyone agrees on which ones are fun and which ones are cardboard disasters. Be specific in your requests and empathetic towards the feelings of your fellow players. Understand that not every rules-pushing card impacts everyone in the same way.

Combos are also an area where players have strong opinions on what is and isn't OK. Silver borders don't change this. If your group wouldn't allow Kiki-Jiki, Mirror Breaker and Restoration Angel kills, then don't take extra turns with By Gnome Means and Magosi, the Waterveil. Silver-border cards aren't an excuse to abandon the social contract. 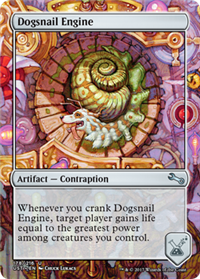 DO: Experiment with New Themes

This change provides a unique opportunity to delve into flavor and mechanics that black-border Magic has shied away from. Unstable in particular with rich with new facets of the game to build Commander decks around.

Yes, that means I strongly encourage you to build a Contraption deck. Basically the only thing keeping these quirky artifacts from being printed in a regular set is the fact that they exist in a secondary deck with its own discard pile (called the scrapyard). Otherwise, every color has ways to interact with Contraptions, and artifacts in general, in ways that can push Commander games in exciting new directions. Embrace it! This is your time to get wacky with ideas.

Rolling six-sided dice is another theme that runs throughout all three Un-sets. With so many cards that support this theme, it's inevitable that someone will try to build around them. Random effects always make for thrilling stories, so let loose and explore.

Mel doesn't have a monopoly on the fun; Vorthos has plenty of options as well. You can build artist-matters decks with Unhinged cards, faction decks for the five governments of Bablovia in Unstable, or a tribal Squirrel deck that mixes cards from black- and silver-border Magic. In fact, finding black-border cards that can flavorfully support your silver-border themes is a deep mining project for any Commander player.

So far, silver-bordered cards are only going to be legal for about six weeks. Don't drop all your money on a fancy foil un-deck that might not even be legal in a month. If you're confident you'll have friends to play it with anyway, go for it! But be smart with your money here and don't go overboard if you don't have to. 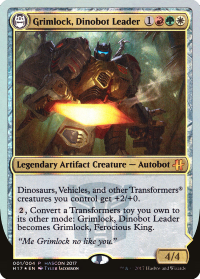 DO: Remember Other Silver-Border Cards

Unglued, Unhinged, and Unstable are not the only places to find silver-border cards. Wizards produces a silver-border promotional card every year as a holiday gift for their business and community partners. HASCON also has an exclusive silver-border promo card: Grimlock, Dinobot Leader (Nerf War is banned and Sword of Dungeons & Dragons can also be found in Unstable) These cards are all legal in Commander, so get brewing with some offbeat single cards!

Griefers exist. Magic has plenty of cards for players that enjoy causing misery, but silver-border cards can theoretically take this to a destructive level. Some people think using March of the Machines to turn Blacker Lotus into a creature, Mindslavering an opponent and using Mirrorweave to turn all their creatures into Blacker Lotuses, and threatening to rip up all their creatures unless they concede is fun. Pro tip: this is not fun. 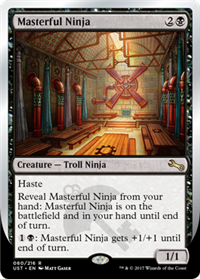 DO: Give Your Animated Library Evasion

That sucker is gonna be huge. Don't let it get chump blocked by tokens. Flying? Good. Trample? Better. Can't be blocked? Best. Maybe even Fling it at someone's face.

DON'T: Forget to Pay for Your Rocket-Powered Turbo Slug

DO: Keep Looking for the Ninja

You'll find it one day. I believe in you!

Commander is a casual format that encourages groups to relax and enjoy Magic. The purpose of this (temporary) legalization is to allow players to have fun with the cards they own. This is especially true of the fancy new cards in Unstable, which releases this Friday, December 8th.

You are all the best judges of what makes Commander fun for you. Keep the social contract in mind and communicate with other players outside of your normal Commander group. So long as everyone else agrees what the standards for fun are, silver-border cards will add an exciting new dimension to your games.