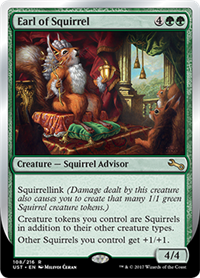 Other than questionable ability naming and squirrels, this could easily be a black-border card.

Unstable is set to release in just a week's time and has already made a splash with wacky, fun, and sometimes barely-plausible cards. The set has enough humor and zaniness to warrant its Un- status but seems much more conservative and stable (despite its name) than previous silver-border sets. With several cards practically begging to be inserted into cubes and Commander decks (such as Earl of Squirrel), many players have been trying to wrap their heads about how to approach their playgroups about allowing silver-border cards.

As an early holiday gift, we need to worry no longer! The Commander rules committee has posted an update (official link) temporarily un-banning in-cards! Of course this comes with its own banned list, keeping a few of the more problematic cards removed from play. There is also a cautionary list, which advises that you may lose friends if you use those cards without consideration to others. Generally, cards that impact non-game actions (Ashnod's Coupon), cards that cause rules headaches (Staying Power, or cards similar to already-banned card (Enter the Dungeon) make up the list.

As an additional note for Unstable, contraptions won't count against your 99, so assemble away! It seems that perhaps adding one of each contraption may give you the most mileage, but perhaps tailoring to those that give you the biggest impact is the better play—just make sure you have at least fifteen to make up your side deck.

My group already plays with some small amount of silver-border cards. One regular has a holiday-card themed Reaper King deck, which features every holiday promo card printed, and I have a Dinosaurs-in-Vehicles Grimlock, Dinobot Leader deck. These have largely been successful as neither tries to break any power barriers—prior communication is key to enjoying a good game. Some cards definitely stretch the rules of the game, but for a nice casual fun evening out, that's sometimes exactly what we need. This opens up an amazing amount of options for some crazy wackiness! I'm personally looking forward to Crow Storm and Baron Von Count, but there's plenty of fun to go around. 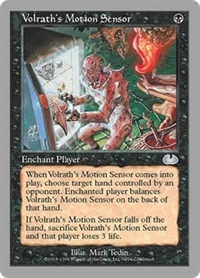 Of course, there is also a lot more opportunity to grief as well-some crazy things have already started circulating around, even combos to "force" your opponent to rip up their deck (You cannot do this.) This isn't really that new. You can't really make a rule to change people from doing bad things, just what they do it with. In the end, the fun you will have to share is going to be based on the fun that everyone brings with them, so just make sure that your brand of humor matches that of your friends. Maybe copying The Countdown is at One thirty times over is not the greatest idea ever. If your group thinks it is funny to pile Farewell to Arms, Volrath's Motion Sensor, and Handcuffs on a person and watch them do a crazy balancing act, that's great! But if that's not their cup of tea, try to find a different joke in all these crazy cards to explore. Trust me, there are a lot of them.

Be open with your communication, and listen as well as talk. Make sure everyone is on an even playing field-if everyone else is playing normal decks, perhaps some Common Courtesy would be to not force a silver-bordered deck into the game "because its legal!"

As Sheldon once said, "The secret to this format is in not breaking it."

Editors Note: The article has been updated. Nerf War was banned in an addendum update.
Posts Quoted:
Reply
Clear All Quotes
Read Next