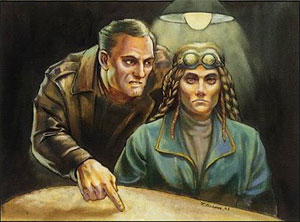 Players will go Head to Head in an epic
Magic-themed mafia game.


Mafia is a party game (also known as Werewolf or WitchHunt in some circles) with two factions — the town, and the mafia. The town has to weed out the mafia, and the mafia has to blend in with and eliminate the town. Games are broken into two phases — Day and Night. During the Day, members of the town vote for those that they believe are most likely to be members of the mafia, and members of the mafia try their best to get members of the town killed. When a majority vote is reached on a single player, that player is lynched, their alignment and role are revealed, and the game goes to the Night phase. Dead players can no longer post in the game. During the Night, the mafia perform the Nightkill, which eliminates a player. Additionally, any extra roles the town may have (such as a Cop, Doctor, or Vigilante) will also be allowed to act during the Night. (Some games have more complex roles that let players act during the Day, and other neat things like that!) These cycles are repeated until either all of the mafia members are dead, or the mafia members equal or outnumber the town members. Either of these conditions being fulfilled will result in the game ending - the former, a town victory; the latter, a mafia victory.


"Okay, but what does that have to do with MTGS, or even Magic?"


Glad you asked! MTGS has a long-running Mafia community that has existed for even longer than the site, itself. We are always looking for new players, and our very own Wheat_Grinder will be hosting an Alara-themed Mafia game with a setup that is geared towards newer players - less complex, easier to understand, but still full of all of the calamity offered in a Mafia game. How exciting! Come play as your favorite legends from the Alara block!


Stop on by and sign up for a game, sometime!