Frontier is the exciting new format everyone's talking about. Maybe you're wondering what all the fuss is about. Maybe you're looking for an all-in-one place to get information and discuss the format in a dedicated Magic community. With this article, we at MTGSalvation introduce newcomers to the format and welcome new and experienced players alike to our new subforum in order to help grow this fledgling format into a great success. Whether you've never heard of the format before or you're one of its original players, make sure to check out this article and our subforum today!
The Magic: the Gathering community is in a bit of a stir as of late, seemingly turned on its head due to the creation of the Frontier format. And reasonably so! The emergence of a new format is very rare in the Magic community, and when said formats prove they can maintain a following large enough to keep them afloat, it is almost a miracle. As such, there are very few community-created formats that have stood the test of time. The most prominent of these is the casual format EDH/Commander, which has grown so large that Wizards of the Coast markets sealed product for it. EDH even inspired the Tiny Leaders format, but many players prefer to use the term "fad" over "format." The short lifespan of formats like Tiny Leaders is what raises questions about Frontier in the first place. If Frontier is the next Tiny Leaders, how long will it be before Frontier is forgotten in favor of the prominent formats such as Standard and Modern? Is the format worth investing into? What is Frontier like? Today, I set out to answer some of these questions, and also touch on some of the new Aether Revolt cards that look promising in the format. However, before we can begin our venture into the unknown Frontier, we must ask:


What is the Frontier Format?
Frontier is a non-rotating format just like Modern, but unlike Modern's cut off date for legality being 8th Edition, Frontier's is fairly recent. All cards printed in a Standard-legal set from Magic 2015 forward are legal in Frontier. Additionally, at the time of writing, there is no ban list. Frontier is dominated by Standard hallmarks of the sets legal in the format, with cards like Siege Rhino squaring off against Smuggler's Copter and smashing into each other's creatures. At first glance, Frontier's card pool looks to be a weakness, filled with only the most recent cards. However, looks can be deceiving. A further examination of the format reveals that anyone who has played through a few recent Standard seasons probably own enough cards already to build a competitive deck! This is only one of the few answers to our next question.

Why Should You Play Frontier? 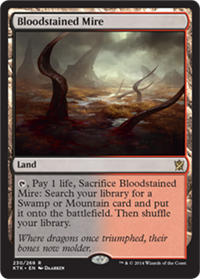 This is a rather complex question. As with any format, buying in carries an inherent risk, and considering how Frontier is brand new to the Magic scene, it comes as no surprise that the format is surrounded by skepticism. However, that does not mean that one should avoid the format. Here are a few reasons why you may want to give Frontier a shot.

1) It is a cheap way to play a competitive, nonrotating format. There is no denying that Modern is rather expensive, with most decks breaking the $500 mark with ease. Legacy triples this price just by the presence of duals and fetches. Frontier, however, only has one set of eternal staples — the Khans of Tarkir fetchlands. Additionally, none of those fetches are particularly expensive when they are compared to the necessary lands of other formats. All five fetches are just under $15 each, so for less than $100 you can build your entire manabase! The most expensive part of building a deck in any format is available on the cheap! This is an incredible financial upside to playing Frontier.

2) Upgrading your current or past Standard decks in Frontier is very easy. Your unused Standard staples most likely have a home in Frontier. You can easily take your old Mono-White Humans deck and overhaul it into Frontier for less than $100. If you played Abzan or Esper Dragons in Standard, you already own most of Frontier Abzan and a sizeable chunk of 4-Color Control. Do you still wish you could Aetherworks Marvel into Emrakul, the Promised End? Luckily, Marvel combo is an easy upgrade into Frontier! If you still have Standard staples and want to use them, Frontier is perfect for you!

3) There is plenty of room for innovation. Frontier's card pool is diverse enough that one can sit down and brew a competitive deck. There are plenty of powerhouse cards waiting to see play, such as Butcher of the Horde, Monastery Mentor, and Panharmonicon! If you like brewing, Frontier is the perfect environment to build your own deck in.

Decks to Beat
Frontier has an established metagame despite its young age. Here are a few of the tier decks in the format that you will most definitely see while trying out the format. 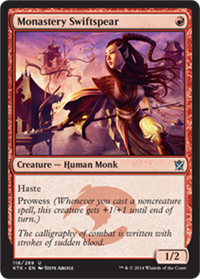 This list was piloted by Snook13 to a 4th place finish in the Reddit Frontier Community Tournament. You cannot get anywhere near any format without running into Mono-Red. This looks like a pretty typical Atarka Red deck form Standard that has been overhauled into Frontier. Simply put, you want to jam your creatures onto the board and turn them sideways as fast as possible! Aim all your burn spells at your opponent's face and close out the game. This deck is very straight-forward, and a known presence in the metagame. Plus, it is very cheap, coming at around $50 for the complete 75 listed here. 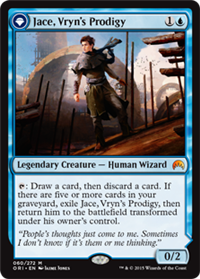 One of the format's premier control decks, Grixis looks to be one of the top tier decks! Using the best removal spells and card draw available, Grixis will bury your opponent in card advantage. Dig Through Time is one of the most powerful cards ever to be printed, and here it stands proudly alongside Torrential Gearhulk and Jace, Vryn's Prodigy. The deck even has some Madness synergy with Fiery Temper. If you are a control player, you do not have to look much farther than Grixis Control. These are just two of my personal favorite decks in the format, and I strongly recommend checking out MTGGoldfish to find out more about the decks to beat. 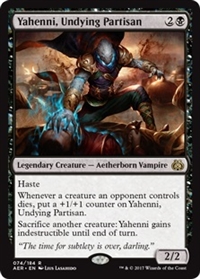 Yahenni, Undying Partisan
Yahenni fills a slightly niche role, but also could bring about a whole new archetype! Yahenni is another cheap creature sacrifice outlet, which means they may make Aristocrats rise to the forefront. While Rally the Ancestors combo decks have existed since the inception of the format, there has yet to be a deck stylized after the classic Aristocrats deck of Innistrad Standard. With Zulaport Cutthroat, Pious Envangel, and Nantuko Husk, maybe Aristocrats can become a legitimate archetype. I will certainly try it out! 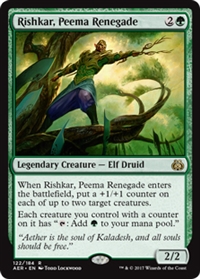 Rishkar, Peema Renegade
Rishkar is fairly simple, and his spot is fairly obvious. He is just another solid card that slots into the existing Elf strategies. However, he also offers mana acceleration to any sort of future +1/+1 counter based strategies, which could be viable given all the attention counters get from Aether Revolt. Rishkar is also just a solid green aggro card and will be a good fit in any green-based aggressive deck. 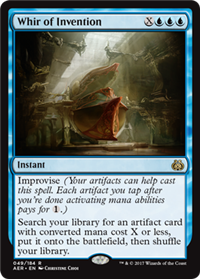 Whir of Invention
The perfect artifact tutor for this format! This is a fantastic example of a card with a power level that will scale as the format develops. Artifacts are a crucial part of every set, and any potential combo piece can be tutored up with Whir. We already have Aetherflux Reservoir and Paradox Engine, two artifacts with a bright future for future combo strategies, and this gets them instantly. I recommend acquiring yours soon before they get bought up. 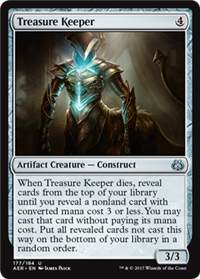 Treasure Keeper
This one might be a little odd, but this card has potential. While you may be asking "When is this card ever good?", that is the wrong question. Rather, we should ask "When is this card ever bad?" While it is true that not being "bad" does not necessarily translate into a card being "good," Cascade is nothing to scoff at, and this card is always going to give you a free spell when it dies. Against the many Abzan decks of the format, this will help you grind against them with incredible efficiency. Whether dying in combat or being sacrificed, Treasure Keeper will always be a solid card.


Where Do I Talk About Frontier?
With Frontier as the next up-and-coming format, it is important to have a strong community to help grow the format as a whole. So, we are proud to announce our new Frontier subforum! You can check it out here! The subforum is just starting up, so we will need help getting it up to speed. We are all in this journey together, and you can certainly expect to see me there on occasion trying to make Aristocrats and other rogue decks work in the format!

That's all for today! Until next time, keep pioneering and exploring Frontier! I was surprised by how much fun the format truly was, and I will certainly be playing Frontier more! I hope to see you in the subforum!
Posts Quoted:
Reply
Clear All Quotes
Read Next
More Trades
Back to Top