PAX Prime was this past weekend, and we all know what that means: Wizards of the Coast unveiled the first major batch of spoilers for this fall's set, Battle for Zendikar. We were shown a world at war. On one side were the inhuman, all-devouring Eldrazi, lead by the titan Ulamog. On the other, the battered remnants of Zendikar's natural inhabitants, rallied by Gideon. Can they hold back the endless swarms of Eldrazi long enough for Jace to solve the mystery of the hedrons, or will Zendikar be lost to the Blind Eternities, just another meal to the Eldrazi?

On one side of the conflict, we have the Eldrazi. Thousands of years ago, they were imprisoned on Zendikar by Sorin, Nahiri, and Ugin, who deemed them too large of a threat to roam the multiverse, devouring planes at will. Using a network of hedrons, they first bound the titans Ulamog, Kozilek, and Emrakul to Zendikar, blocking their ability to traverse the Blind Eternities, and then imprisoned them, preserving Zendikar.

During the events of the first Zendikar block, they were released through Nicol Bolas's machinations, which found Sarkhan Vol, Jace, and Chandra together in the Eye of Ugin, causing the bonds to weaken. Sorin returned, enlisting the aid of Nissa, but the elf, upon discovering Sorin's vampirism and misunderstanding the Eldrazi's imprisonment, chose to shatter the main hedron and release the titans from the magic that bound them to Zendikar, hoping they would leave. Emrakul and Kozilek left to seek out other planes, but one titan remained to finish devouring Zendikar. 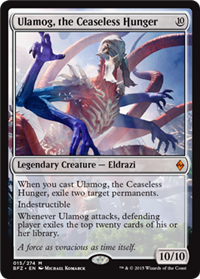 Ulamog returns in Battle for Zendikar. We can see that he keeps four traits from his initial incarnation: casting him allows you to remove opposing permanents, he has a 10/10 body, he's indestructible, and attacking with him triggers a powerful drain on your opposing resources. There are several changes, however. His mana cost comes in a bit lower, he removes two permanents instead of one and exiles them instead of destroying, and his attack is a massive twenty card exile "mill" rather than snnihilator. Exile mill might seem somewhat out of place in a vacuum, but as we can see from the next several cards, it has become a signature of Ulamog's brood, and represents their ability to consume magical energies. 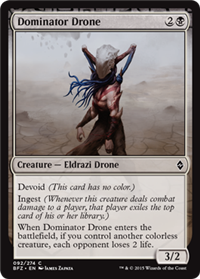 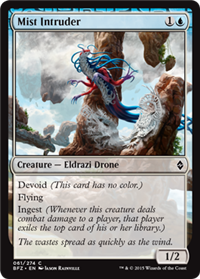 This brings us to the first mechanic for the Eldrazi: Ingest. As the lesser Eldrazi attack players, they consume their magic energies in the form of exiling cards from their library. Now, the amount of cards being ingested will never seriously threaten to kill a player through mill, so why would players want to do it? 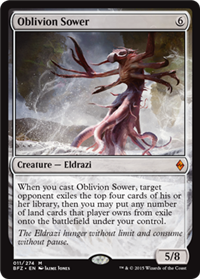 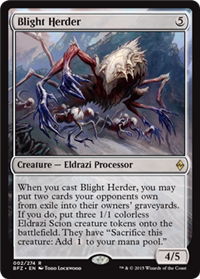 The Eldrazi play around in a relatively new design space: exiled cards matter. While Mark Rosewater has spoken out many times against being able to manipulate your own exiled cards, as he does not wish the exile zone to simply become another graveyard, the Eldrazi do not do that. Instead, they use your opponent's exiled cards as a resource. Oblivion Sower allows you to steal exiled lands, while Blight Herder processes exiled cards into Eldrazi Scion tokens. There will be other "processor" creatures with similar capabilities. It is also notable the interactions between these mechanics an delve. If you are reliant on delve to power out strong spells like Dig Through Time and Tasigur, the Golden Fang, you may find yourself inadvertently providing fuel for your opponent's Eldrazi. 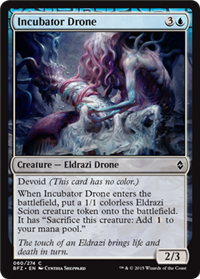 As in Rise of the Eldrazi, some of the lesser Eldrazi have the capability to create even smaller Eldrazi tokens that are capable of being sacrificed for mana. To represent the growing threat, Eldrazi Scions are 1/1's to the Eldrazi Spawn's 0/1's, meaning that they have the ability to become a formidable threat in and of themselves, in addition to being used to ramp out large Eldrazi. 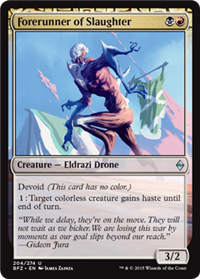 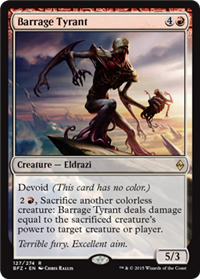 Devoid is the other new keyword mechanic present on Eldrazi. Unlike Rise of the Eldrazi, where lesser Eldrazi Drones were often colored, many of the new Drones and smaller Eldrazi have colored mana symbols, but are themselves colorless. Many of these cards also present a "colorless cards matter" theme, which plays well with devoid to give you additional cards to use for that purpose. Of note, some Khans of Tarkir block cards interact as well, as facedown creatures from morph or manifest are colorless, and cards like Ghostfire Blade and Tomb of the Spirit Dragon work with colorless creatures. 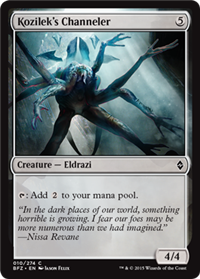 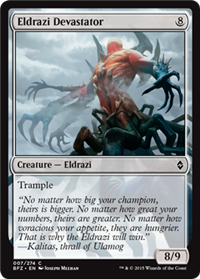 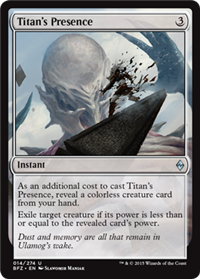 A few more Eldrazi cards round out the spoilers for their side. Kozilek's Channeler and Eldrazi Devastator give a glimpse of what triple Battle for Zendikar limited might entail: powerful ramp into huge fatties, much like Rise of the Eldrazi. Titan's Presence shows the return of colorless noncreature spells, and provides another "colorless matters" card that supports playing large creatures.

A Glimmer of Hope

Things look pretty bleak for the survivors of Zendikar. Already, entire continents have been lost to the Eldrazi, blighted into ruin and drained of their power. The few who have survived are banding together in a last desperate attempt to hold back the Eldrazi. Things are bleak, but the survivors have a few tools at their disposal. 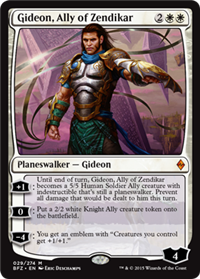 Leading the survivors is Gideon. His latest incarnation packs a powerful suite of abilities. The latest version of his signature "turn into a creature" ability turns him into a 5/5, which is efficient for a mere four mana, especially given that it is immune to both traditional Day of Judgment effects as well as Murder-type instant targeted destruction spells. As a perk, it bumps up his loyalty by one in the process. He also possesses the ability to generate 2/2 tokens at a +0, and his "ultimate" is an immediately-usable Glorious Anthem emblem, which can in turn buff both the tokens or Gideon himself. The only awkward part is that it takes all of his starting loyalty, and Gideon's +1 does not have an immediate effect, so it creates a tension where the player must decide whether to throw Gideon away in exchange for a permanent anthem, +1 immediately to no effect in order to create an anthem and stick around on the second turn, or use the +0 ability for immediate benefit, but delay making an anthem and surviving until at least Gideon's third turn. Despite this, Gideon still provides a powerful suite of flexible abilities for a mere four mana, which tends to be the upper bound for Planeswalkers being playable in older formats.

Also of note, both Gideon's creature form and the tokens he produces have the Ally creature type. Why is this notable? 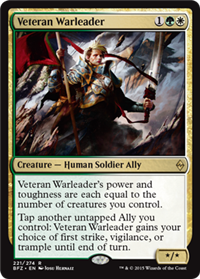 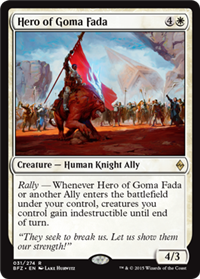 Allies have returned with tribal effects in Battle for Zendikar. Instead of being strictly parasitic, however, it appears that the new form of Allies will benefit from or provide benefit to all creatures, but work best with Allies. Rally provides a constellation-style ability word that provides benefits to all of your creatures whenever an Ally enters the battlefield, while Veteran Warleader grows larger for every creature you control, and can utilize allies to gain additional abilities. 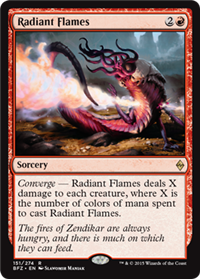 Cooperation is the name of the game when it comes to surviving the Eldrazi. In addition to Allies working well with all creatures, there is a new ability word, converge, which provides benefits for playing multiple colors. Converge appears similar to sunburst, but can appear on a variety of effects instead of just +1/+1 and charge counters. There is only one card revealed with it so far, but it is a rather powerful one. Radiant Flames provides a nice replacement for the rotating Anger of the Gods, and will fit nicely into three-color control decks in Standard as a way to eliminate early creature swarms. 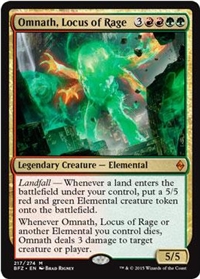 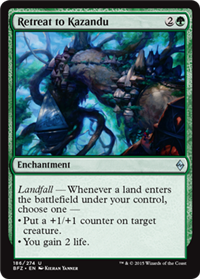 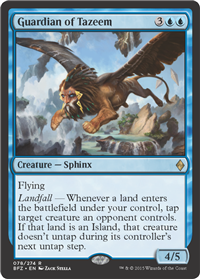 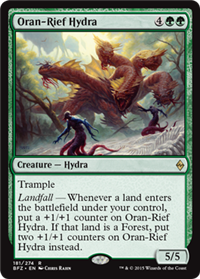 A return to Zendikar wouldn't be complete without Zendikar's signature mechanic, landfall. Just as last time, landfall provides an incentive for playing additional lands, encouraging a land-heavy deck and the use of fetchlands. There are a few new twists on it, however. Retreat to Kazandu provides multiple options on landfall, making it more versatile. Guardian of Tazeem and Oran-Rief Hydra provide another variation: you get a bonus to the effect generated when playing a specific land type. This provides an interesting tension with converge in that you can play a deck focused around one color to maximize the on-color landfall triggers, or diversify into multiple colors to create larger convergences. 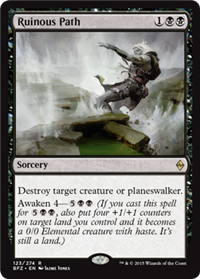 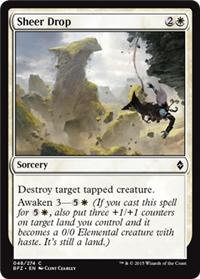 Filling in the role of kicker from the original Zendikar is a new mechanic, awaken. Awaken provides an alternate casting cost for a spell to add an additional effect of animating a land with a specific number of +1/+1 counters. This provides interesting interactions with several of the other mechanics. The animated lands remain colorless, meaning they can interact with the Eldrazi's "colorless matters" effects. At the same time, they provide a card you can utilize early, yet still reward you for playing a lot of lands, like you might wish to do in a deck with landfall effects. Ruinous Path is particularly interesting, as it fills in for the soon-to-be-rotating Hero's Downfall, while also providing a late-game threat, similar to Shriekmaw. 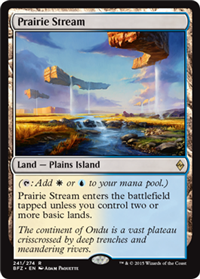 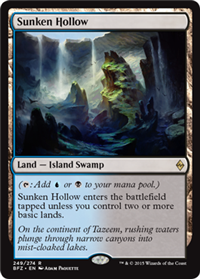 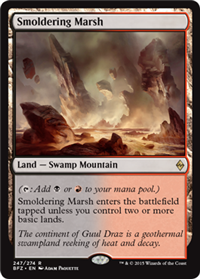 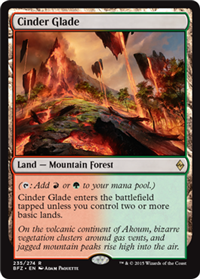 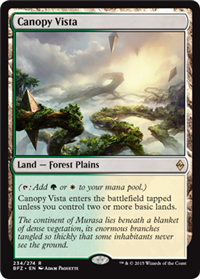 Battle for Zendikar brings with it a lot of exciting news for land-loves. For starters, there's a new cycle of dual lands. For only the third time ever, and the first time within a Standard with fetchlands, these dual lands have the corresponding basic land types. Unlike shocklands, which require a life payment to enter untapped, these lands enter tapped unless you control two basic lands. This makes them potentially very powerful in two-colored decks, where a comfortable basic count can accompany these and fetches, while being significantly weaker in three-color decks, which will struggle to run enough basics to allow them to enter untapped consistently. 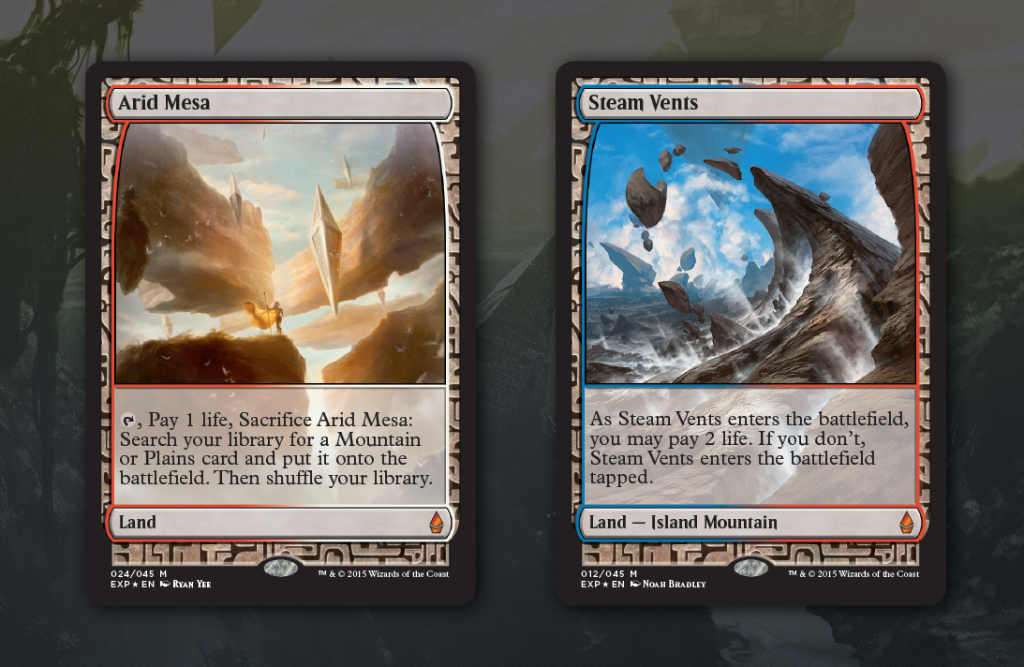 Finally, there is a new type of premium card in Battle for Zendikar, in the vein of the "priceless treasures" from the first Zendikar: Zendikar Expeditions. These cards, part of a technically separate set, are foil, extended art versions of land cards. There are 25 of these cards in total: the five new dual lands, all ten fetchlands, and all ten shocklands. Each will show up with a similar rarity as foil mythic rares. The fetchlands and shocklands will not be Standard-legal, but will be legal in Limited if you open any.
Posts Quoted:
Reply
Clear All Quotes
Read Next
More Trades
Back to Top