In this article, we discover how to combat commanders, which sometimes pop up in Commander. From exiling to sacrificing to countering them, just because you can't tuck them doesn't mean they're invincible.

Tucking has historically been viewed as a way to keep problematic and powerful commanders in check. With the changes to how the Commander format handles tuck and bounce, we're going to use this issue of Word of Command to discuss alternatives to keeping commanders in check, as well as how to answer other problematic permanents.

Commander Tuck is No Longer a Thing


With a new set comes a new ban list update. This update comes with no changes to the actual ban list, but comes with a rather large rules change: If a commander would be put into a hand or library from anywhere, its owner may have it go to the command zone instead. This brings bounce and tuck in line with other removal on commanders.

Players have a lot to say about this change, so we recommend reading the official announcement as well as Sheldon's article over at StarCityGames. If you want to join the discussion, the discussion thread started by Infecter4life is where it's at.


Cryogen runs the Top 50 List, a user-driven list of the top cards in each color. This month we're reporting on black spells and creatures:


Black Creatures
Out
In
Black Spells
Out
In


Magic has always been a game of answers, but a variety of permanents are printed with varying degrees of resilience. In this article, we're going to briefly highlight the various abilities that make permanents more resilient and general ways of bypassing those abilities. From there we're going to discuss some various removal options in each color that manage those effects.


There are a number of abilities in Magic that make various permanents more resilient, so as a starting point we're going to go through and define the various abilities, as well as highlight some general mechanics that can be used to answer permanents that have those abilities. 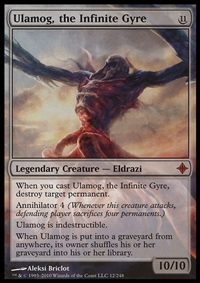 Indestructible: First up will be the the most iconic of this set of abilities. The indestructible keyword stops all destroy effects, as well as destruction caused by damage. Found recently on the Theros block Gods, and often granted to choice threats by way of various equipment, this ability blanks a large portion of common wrath effects, and several powerful or cheap removal options such as Pongify or Krosan Grip. In order to bypass this ability, you'll need to select removal options with other means: Exiling remains the most popular option, but tuck options still work well here, as does making a player sacrifice the permanent or giving enough -X/-X effects to cause it to be placed in the graveyard for having zero toughness.


Hexproof/Shroud: Next up is the common method of protection against single-target removal. Hexproof and shroud are found on a few popular commanders and choice threats, but are most often added on through the ever popular Lightning Greaves and Swiftfoot Boots. The recently printed Arcane Lighthouse makes it quite easy to blank this ability, and if the ability is granted by equipment there's always the option to simply destroy that equipment. Barring those, you'll need to find some non-targeted options of removal. In many decks this comes down to using a Wrath effect to clear it out. If you don't want to clear your own board, there are a few other good non-targeted effects: Many edict spells target the player or even have no target at all; certain spells, such as Council's Judgment are entirely non-targeted, allowing them to bypass hexproof, and auras that enter the battlefield directly don't actually target, allowing them to be attached directly onto a legal object, as aura spells only target while on the stack.


Protection: Protection is one of the older resiliency abilities and provides a broad range of defenses: It prevents damage that would be dealt by the protected quality, prevents attachment of auras, equipment, and fortifications of the protected quality, gives some evasion in that it can't be blocked by the protected quality, and prevents targeting from sources of the protected quality. Often, creatures simply have protection from certain colors, such as those granted by swords, or found naturally on creatures like Animar, Soul of Elements. This means that playing a multicolor deck can give more leeway by using another color instead. Certain creatures such as Progenitus, True-Name Nemesis, and Pristine Angel are a bit more all-encompassing. The targeting clause is the most immediate problem, and so a number of the potential solutions get shared with the hexproof and shroud list, but the aura tricks and certain Red wraths are removed from the list of answers. Wraths, edicts or other sacrifice effects, and non-targeted effects will remain your best options. 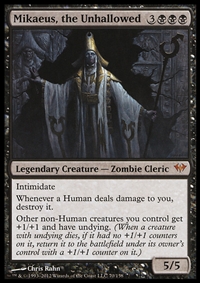 Persist/Undying: Persist and undying give a second life to creatures, allowing them to survive a round of traditional removal. Seen on a few good cards, or granted by a few utility spells, these abilities are rather easy to reuse by removing the counter placed upon them and can often be seen in combos. While not keyword abilities, variations of the theme are also found on certain other cards like Marchesa, the Black Rose and Shirei, Shizo's Caretaker. This ability is a bit unique in that some well-timed graveyard hate can help shut down the persistence. Removing the offending thing twice is also an option, but simply preventing it from hitting the graveyard works even better, since most things with this ability tend to give value simply on entering the battlefield or dying. Tuck options work once again here, as do exile options.


Commanders: This format that we choose to play bends the rules of traditional Magic to let us hand pick our own resilient creature. Previously, tuck options were used to help combat dangerous commanders, but with the recent changes, what do we have left? First off is the built-in commander tax: even if removing a commander isn't the end-all solution anymore, at some point it will grow too expensive to be a worthwhile investment. Except for Derevi. Some decks will handle the tax better than others, but repeatable removal can be one part of the answer. The next option is to simply make the commander useless, there are a variety of prison auras that can help lock down a creature or other permanent until the owner is able to reset it. Another way of making commanders useless is by hating on specific aspects or common strategies, such as with Torpor Orb or Cursed Totem. Finally, taking control of a person's commander remains an effective way of keeping it out of their hands and out of your face so long as you don't overly antagonize other players with it, they'll likely not kill it off either since it will most likely do less harm in your hands than in the hands of its owner.


Now that we've laid down the basics, the problem comes in when a permanent ends up with multiple defensive capabilities. The key here is to find some effect that combines the answers of two groups: for example, if a creature has both hexproof and indestructible, you'll want a non-targeted way to either exile or tuck it. This means that no matter the threat you're up against right now, a well timed Terminus will clear it away.


White is quite simply the removal king in Magic, spanning the widest selection of wrath effects, alongside a large variety of single target creature removal including the ubiquitous Swords to Plowshares and Path to Exile. It can also remove artifacts and enchantments with ease. Since White has so many options, I'll just touch on a couple of key cards for each effect: 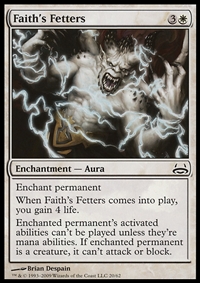 
Blue is better known for counterspells and bounce effects, but there are a number of good removal spells still available, stemming from the theme set by Pongify, Rapid Hybridization, and Polymorph. 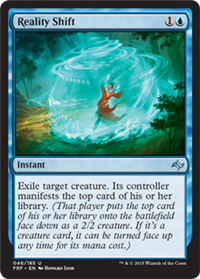 
Black has had strong removal dating all the way back to Terror. While a lot of Black's removal has self limitations, Black makes up for it with sheer versatility of methods of removal, being king of sacrifice effects, -X/-X effects, and even has a fair number of wrath effects and exile spells. Black's wrath effects tend to be pricier, but have added benefits, such as being one sided or drawing lots of cards. 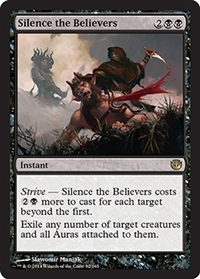 
Red is another high-removal color, but unfortunately it mostly revolves around damage. From wrath effects to single target removal and even its variations on exile all involve making things burn. A few outliers exist, such as Fissure. 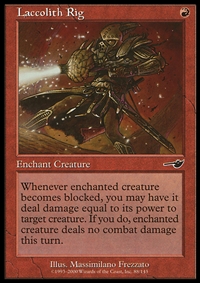 
When people mention green removal there are a few cards that immediately come up: Beast Within, Krosan Grip, and occasionally even Desert Twister get mentioned. Aside from killing fliers, Green is considered to be the weakest removal color for creatures. These days, though, this has been on an upswing thanks to the fight mechanic being given over to Green, especially with the large array of deathtouchers available to the color. It's also important to keep in mind Green's array of lure effects as well. 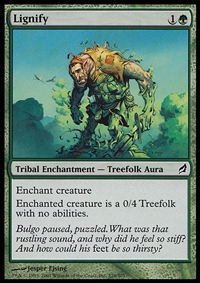 
No matter whether you are building a mono-colored or multi-colored deck, artifacts help fill in the holes that naturally occur between the colors. Certain colorless removal options are widely known and used: Oblivion Stone, Spine of Ish Sah, and Nevinyrral's Disk show up in a large amount of lists. 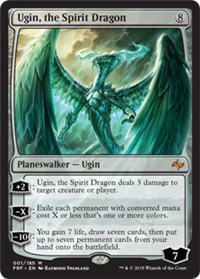 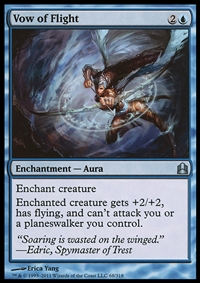 Since one of the major themes I've been discussing has been the transference of using tuck to deal with opposing commander to various prison effects to make them impotent. I'd like to take the time to jump to a cycle of cards printed in the first Commander product: the cycle of vows.

As far as prison enchantments go, they lack a little something to stop commanders that gain value through their abilities, or who don't really care who they attack, but they do still serve an excellent purpose of generally preventing bad things from happening to you, all while encouraging bad things to happen to other people who are not you. A most excellent type of situation to promote.

Give them a try in the next deck you build, and you may be pleasantly surprised at the result.


Of course, if all else fails, you can always rely on rule 800.4a to get rid of a problematic permanent. Roughly paraphrased, it goes something like this: If a player loses the game, all their stuff goes away too. Sometimes the best solution is the easiest one.
Posts Quoted:
Reply
Clear All Quotes
Read Next
More Trades
Back to Top