Fate Reforged Rumor Season is in full swing, and it's time for the first spoiler digest. The first week has brought us many exciting cards, including eight of the ten Mythics, several sneak peeks at cycles, and some wacky new mechanics. 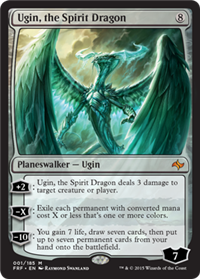 Continuing in their tradition, Wizards of the Coast revealed their winter set's planeswalker on Christmas day. This year, we got our first glimpse of Ugin, the Spirit Dragon. Ugin is the second colorless planeswalker ever to be released, and he provides a powerful suite of abilities. His mana cost is rather high at eight, but preliminary theorycrafting and testing is showing that he may have a place in Standard Nykthos, Shrine to Nyx ramp decks, as well as potentially Modern Urzatron decks. He also has applications in Commander.
Ugin's +2 ability is Ghostfire, a throwback to the first card ever to mention Ugin. Like Ghostfire, Ugin is colorless, meaning his Lightning Bolt can hit even those creatures who would normally be protected from burn spells. Simply by the merit of being a positive loyalty ability that can remove threats, this ability is very strong at keeping Ugin alive and ticking towards his ultimate.
Ugin's -X is a unique ability, not represented by any existing card. It is evocative of Pernicious Deed and All is Dust, though it does things neither can do. Like Pernicious Deed, it allows you to select a value for X and destroy permanents with that converted mana cost or less. Like All is Dust, it only affects colored permanents, meaning it spares most artifacts, lands, Eldrazi, and morphs. Unlike either, it exiles all permanents it affects. This is potentially an extremely powerful sweeper, which can remove multiple threats to Ugin's continued existence for a scant two to three loyalty while leaving your own creatures alive. It can even be used for zero to clear all tokens from the field.
Ugin's ultimate ability is a close mirror of that of Nicol Bolas, Planeswalker, Ugin's old rival. Bolas dealt 7 damage to a player and made that player discard seven cards and sacrifice seven permanents. Ugin does the opposite to you, allowing you to gain 7 life, draw seven cards, and put up to seven permanents from your hand onto the battlefield. 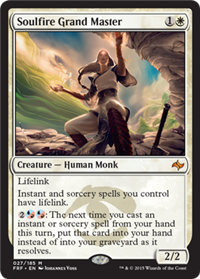 The other mythic that has everyone talking is Soulfire Grand Master. For two mana, the Grand Master provides a 2/2 body with lifelink. This has shown up before on cards like Ajani's Sunstriker and Knight of Meadowgrain. Additionally, she provides all of your instant and sorcery spells lifelink. The closest any card has come to having this ability is Tamanoa from Coldsnap, who was three colors and had a lackluster body for three mana. Turning every Lightning Bolt into a Lightning Helix and making actual Lightning Helices gain you 6 life is nothing to scoff at, especially in the aggro mirror. But it is Soulfire Grand Master's third ability which really has people excited. For four mana, she effectively gives any instant or sorcery buyback. This has tons of obvious applications. There are the mundane applications such as buying back a Lightning Strike or other basic spell. There are cruel optionssuch as buying back counterspells to lock your opponent out of the game. Finally, there are infinite combos, as any Time Warp effect that does not exile can be cast every turn to take infinite turns, albeit for nine mana. Turnabout and Mana Geyser can also be used to generate infinite mana. 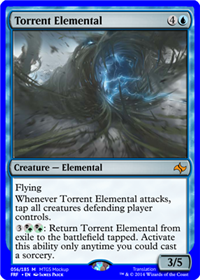 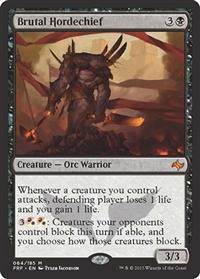 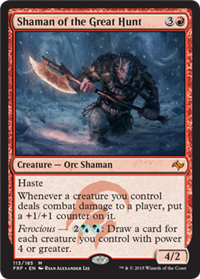 Soulfire Grand Master proved to be the first of a cycle of cards. Each of the cards represents one of the clans, being of the allied color to the main color of that clan, and having an activated ability using hybrid mana of the other two colors. We are still awaiting the green Abzan entry to the cycle, but the others have all been revealed, and are all very exciting. Torrent Elemental is the first of these. Torrent Elemental seems closest to Prognostic Sphinx on first glance, offering a 3/5 flying body for five mana with an attack trigger and a protective ability. The attack trigger is fairly powerful, tapping all defending creatures and effectively making all of your creatures unblockable. The protective ability is the really exciting one though, as it allows the player to return Torrent Elemental from exile. Previously, only Misthollow Griffin has offered this kind of ability, and the Torrent Elemental's body and abilities are more powerful than that of the Griffin. The Elemental seems like an especially attractive prospect in Standard, where self-mill cards and Whip of Erebos offer many ways to exile Torrent Elemental once it reaches your graveyard.
Brutal Hordechief is Mardu's representative of the cycle. He offers an aggressive curve-topping ability similar to Hellrider, draining one point of life for every creature you control that attacks. Additionally, his activated ability allows you to control your opponent's blocking decisions similar to Master Warcraft. This can be powerful for forcing bad trades and getting most of your team through for damage.
Red's member is Shaman of the Great Hunt. As a 4/2 haste that can buff your team, he draws parallels to Hero of Oxid Ridge. His bonus is not immediate, being a +1/+1 counter on damage a la Curse of Stalked Prey, but it buffs toughness and provides a permanent increase. In addition, his activated ability allows you to draw a card for each creature you control with power 4 or greater, which provides a powerful late-game presence for an aggressive or midrange deck. 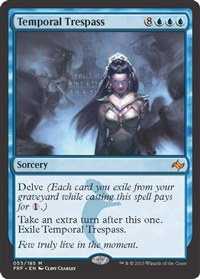 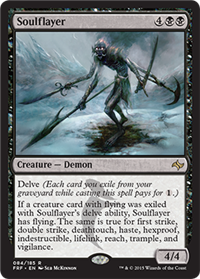 Delve is the first returning mechanic, still in Sultai colors. Soulflayer hints at a new direction for the mechanic: caring about what cards get delved away to cast a spell and providing bonus effects based on those cards. Temporal Trespass is yet another piece of the Power Nine turned into delve form. This time it's Time Walk. However, unlike Treasure Cruise, they appear to have been quite a bit more conservative here. This requires three blue mana even when at maximum delve, only providing a two-mana discount from the non-delve version of the spell plus self-exiling to prevent recursion shenanigans. 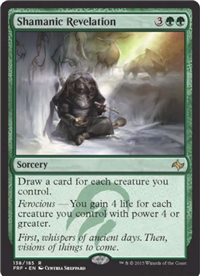 Ferocious also returns for the Temur clan. While it appears to be largely the same, Shamanic Revelation hints at a slight shift, as it counts each creature with power 4 or greater, rather than being a simple binary check. Not bad for a card that also strictly obsoletes Collective Unconscious. 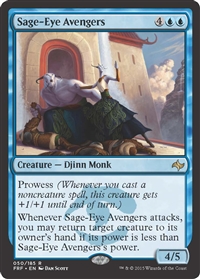 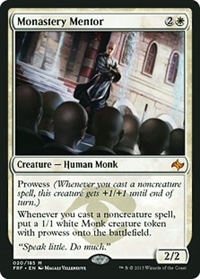 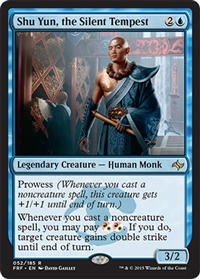 The Jeskai have prowess as their returning mechanic, also largely in an unchanged form. The one innovation in Fate Reforged appears to be the addition of a check that measures the prowess creature's power against another creature, as seen here on Sage-Eye Avengers.
Monastery Mentor offers another powerful twist on the mechanic, creating tokens with prowess. Similar to Young Pyromancer, he triggers repeatedly when you cast the appropriate spells (in this case, any noncreature spell).
Shu Yun is the Khan for Jeskai in Fate Reforged, and he also brings a powerful prowess ability to the table. Whenever you cast a noncreature spell, you can give a creature you control double strike. 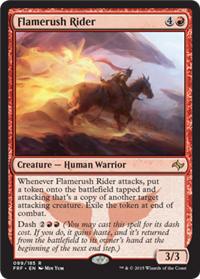 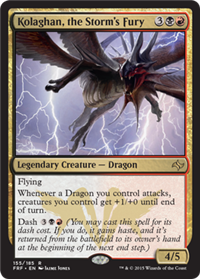 Raid does not return for Mardu. Instead, they have a new mechanic: Dash. Dash provides an alternate method of casting the card, similar to evoke. A creature that is cast for its dash cost gains haste and returns to its owner's hand at end of turn, similar to Viashino Sandscout. Some dash costs are cheaper than the mana costs of the cards they are on, such as Flamerush Rider and Heelcutter Goblin, allowing the creature to hit and trigger their "when this creature attacks" abilities sooner than they'd be able to be cast, while also conveniently enabling raid for that turn. Other dash costs, like that of Kolaghan, the Storm's Fury, are the same as the regular mana cost of the card, and simply offer the ability to get haste to attack immediately while also dodging sorcery-speed removal your opponent might have. 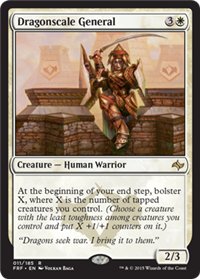 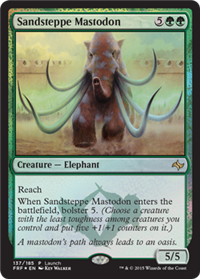 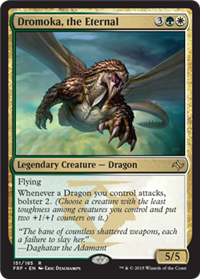 Abzan also has a new mechanic replacing outlast. "Bolster n" is a keyword action that places n counters on your "weakest link" creature, as defined as the creature with the lowest toughness. This allows you to spread your power between all of your creatures, leaving few or none vulnerable to damage and toughness-lowering removal. This action can be taken repeatedly, as seen on Dragonscale General and Dromoka, the Eternal, or as a one-time trigger, like on Sandsteppe Mastodon or Honor's Reward. Bolster also plays nicely with outlast, as it spreads counters around to enable the outlast lords like Abzan Falconer and Mer-ek Nightblade. Dragonscale General in particular benefits from tapping your creatures to outlast them. 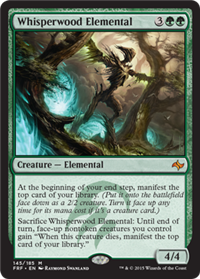 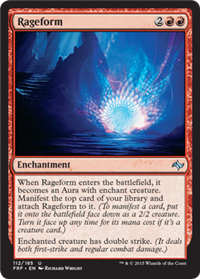 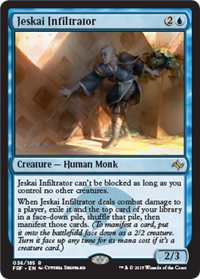 Morph is sadly also not returning, but Manifest is taking its place, and offers an alternative method for getting creatures into play face down and flipping them face up. To manifest a card, you put it into play as a face-down 2/2, which can then be flipped up at any time if it is a creature card simply by paying its mana cost. Face-down cards with morph can also turn face up using their morph costs normally. All manifest actions that have been revealed so far have been manifesting the top card of your library. The one exception is Jeskai Infiltrator, who manifests both the top card of your library and itself, both from exile after shuffling them so that your opponent does not know which is which. This mechanic is exciting, offering potential blow-out situations where a player manifests a creature that can turn face up cheaply, like Master of Pearls, Hooded Hydra, Hunted Horror, or even Phyrexian Dreadnought. It has also raised a number of rules questions, which I will try to address here. 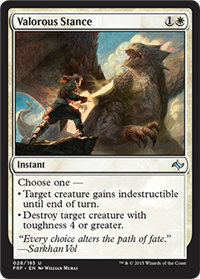 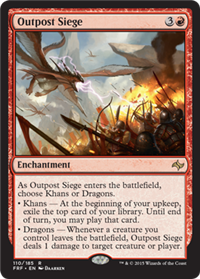 Fate Reforged also features a large number of cards that offer a choice between two outcomes. Some of these are on instants and sorceries, and behave as any other modal spell does. Others are present on permanents with enters the battlefield triggers, like Hooded Assassin, and behave similarly to modal spells. The most interesting of these, however, are the cards like the Sieges cycle, which allow you to choose between two different ongoing effects as they enter the battlefield. 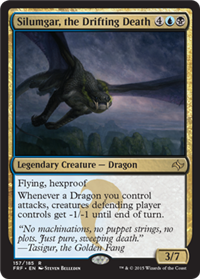 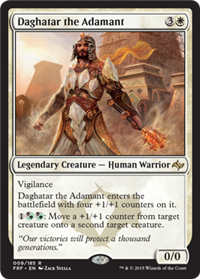 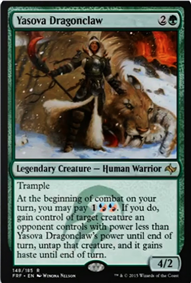 Each clan has both a Khan and a Dragon in Fate Reforged. The Khans are in their clan's main color, with a hybrid ability in both of the clan's other colors. The Dragons are in the two allied colors of their respective clan. Some of the Khans and Dragons have their clan's keyword, but there are a few that do not.
Silumgar, the Drifting Death is a powerful control win condition for Dimir decks. It only has three power, but it has both flying and hexproof. Every attack of both it or another Dragon gives a Doomwake Giant trigger. This is tailor-made to disrupt Elspeth, Sun's Champion, as it flies just under her Retribution of the Meek ability, while wiping away any tokens she generates.
Daghatar the Adamant is an efficient, vigilant beater who provides the ability to manipulate counters.
Yasova Dragonclaw is a ferocious trampler for a mere three mana, who can also Threaten a creature each combat, as long as she is larger than it.

Fetchlands Return!
Oh yeah, and if all of that wasn't enough for you, Fate Reforged will use its land slot in the same way that Dragon's Maze did. The common Bloodfell Caves cycle of mana-fixing refuge lands appear in the land slot, as well as offering the possibility of Khans of Tarkir's fetchlands to appear in that slot instead.
Posts Quoted:
Reply
Clear All Quotes
Read Next
More Trades
Back to Top