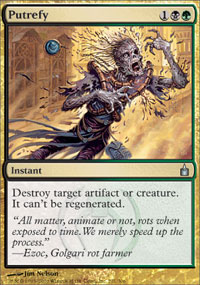 Yups... It’s time for another HKKID article. My last one (that nobody read) was about RW control. I cleverly wrote the entire thing before noticing that we already HAD a RW control article, and so we couldn't use mine. Oops. Since we DON’T have an article on the biggest deck in Standard, I'm gonna write me one about BG control instead.

BG control (or The Rock if you must), bears little resemblance to its more powerful Extended cousin. Extended has Duress and Cabal Therapy, while Standard is stuck with Persecute and Hypnotic Specter. Extended has Troll Ascetic to give control players (well, Tog players mostly) nightmares, while Standard has nothing (we've also got no Tog-style control deck either). Extended has Smother, Pernicious Deed, and Putrefy, while Standard is stuck with Last Gasp, Plague Boiler, and well, Putrefy. Extended has Living Wish to find what it needs, while Standard has, ummm, Diabolic Tutor? Transmute cards? No matter how you look at it, Extended is the 350 pound WWE wrestler, whereas Standard is the 350 pound fat guy in the audience with a sign. (That's 159 kilograms for those of you who prefer to measure stuff in units that make sense). So why is it that people expect BG control to be the new best deck in the format?

Because it is. Modern Black/Green sports a toned down but rather slick set of everything that makes its Extended cousin so tenacious. It has card-drawing spells; it has hand disruption, creature removal, graveyard recursion, and efficient beaters. Unlike RW control, it has efficient creatures, and doesn't lose to a triple-Putrefy hand. Unlike Gifts Ungiven, it doesn't rely on any specific cards or combos to win. Unlike the GW control decks, it doesn't suck. Make no mistake about it, BG control is THE top deck of this year’s Standard, at least until Guildpact comes with more cool stuff. So, with all this goodie goodness, what the hell does a BG deck look like? I'm so glad you asked! If States was tomorrow, here's what I would be playing:

Lands
I'm cutting it short at 23 lands, but with 4 Birds and 4 Tribe Elders it usually works fine. A few more BG duals would help color screw, and I'm in the middle of testing how much more pain/shock I can tolerate in the mana base.

Svogthos was high technology back when I first added him. Now he's just old hat. He can still beat for a ton, and interacts nicely with any board clearing effect such as opposing Kagemaros, or my own Plague Boilers. It’s a similar story for Miren the Moaning Well. Life gain is *some* good when you're playing control, especially if you're using Phyrexian Arena.

Nezumi Graverobber: One of those funny cards that's just randomly incredibly powerful. Both the mirror and Gifts have graveyard effects, and shutting them down is a big edge. I'm pitching one to the main deck to see how he performs (hey I'm never done testing either), while the other three are in the sideboard.

Hypnotic Specter versus Persecute: Now we're into serious business. The much maligned Hippie (and rightfully so), versus the monocolored discard in the multicolored block. Both cards hit the opponent at the same speed, but Persecute is more reliable (since it doesn't die to Putrefy), takes the business cards out faster, and doesn't ever get blocked by a Leonin Skyhunter. So why in the name of all that is holy am I playing Hypnotic Specter instead? Umezawa's Jitte. Funny thing about Jittes, is that they get way better with more creatures to attach to. A 2/2 flier is a natural Jitte target, and the discard is decent as well. Don't get me wrong, if Jitte goes, Hippie is gone like *snaps fingers* that! However the ability to pile charge counters onto the most powerful artifact in the format overrides being less potent at ridding my opponent of their hands. 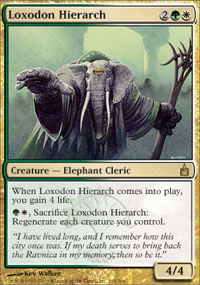 Loxodon Hierarch: Look ma, it's Ravenous Baloth on the Rafael Palmero diet! Life gain is hugely important to BG. Not only does it enable the BG player to take more shots from spells like Char or Volcanic Hammer (which helps the aggro matchups a TON), but it allows you to keep those Phyrexian Arenas on the table for 10-15 turns versus control players, and STILL take a shot or two from a 6/3 hasted Angel. Many people mistakenly attempt to use Golgari Brownscale for this role, however a 4/4 body is vastly superior to a 2/3 with Dredge. The fact that you gain life NOW (and more of it too), rather than when the creature dies is incredibly relevant against aggro decks. It is literally worth splashing white JUST for Hierarch, which is good news, since the rest of the stuff in White is mostly sub-par.

Grave-Shell Scarab: Just about everyone knows that Grave-Shell is one of the best creatures in the deck. He doesn't ever stay dead, and a 4/4 body can tangle with just about anything in the format. There are some people who advocate only using one or two Scarabs in your deck, but these are mostly the same people who thought "that Ravager deck" would never be as good as the versions of Affinity with Broodstar. Just try not to fleece them too badly when you play a few games for ante.

Kokusho The Evening Star vs. Gleancrawler: This is one where I can still make a good argument either way. Thus far all that testing has conclusively demonstrated is that both cards are really stinking powerful. They seem almost evenly matched, however I opted for Kokusho because he is often more dangerous in the mirror, where the flying is very important, and Rend Flesh often sees play.

Cool stuff: I'm constantly surprised how few people use Phyrexian Arena and Umezawa's Jitte. The two cards are two of the most blatantly powerful spells in the format. Neither requires me to sing their praises, as steady card draw and steady removal/life gain are both as good as they appear. I strongly recommend everyone play four Arenas, and anyone with more than 16 creatures (not counting Birds) play at least three Jittes. Why would you pass up cards that stinkin' powerful?


Matchups
The Mirror
The mirror is somewhat chaotic, due to the huge available card pool. I believe this version of BG fares better than most however. As you might expect, the Grave-Shell Scarabs quickly clog the ground making attacking that way very difficult. However if you mise that lone Nezumi Graverobber you now have an instant-speed answer to opposing scarabs and a HUGE advantage. Because of the tangled ground, the most common path to a BG mirror win is through the air. Try to save your removal for opposing Dragons, and if possible bait out the other guy’s Putrifies with your Jittes and Hippies.

On the sideboard, Graverobber and Cranial Extraction are both very useful. Tech for the versions splashing White is Circle of Protection: Black, since most or all of the relevant beaters in the average BG are Black (or a Black shade of Gold).

Gifts Ungiven
This matchup can go either way, and depends largely on what the Gifts player is using. The Ethereal Haze lock has largely fallen from favor; however it is also highly effective against BG. A similar Cranial Extraction "lock" is significantly slower, and much less effective. In general game one will go against you, because the Gift’s silver bullets are very difficult to overcome.

For sideboarding, Cranial Extractions and Nezumi Graverobbers are the most effective spells on my sideboard. Graverobber provides you a strong answer to the Hana Kami and other graveyard shenanigans, allowing you to RFG whatever was targeted. What you choose to Extract depends on how the game has gone thus far, however in general my favorite targets are Gifts, Kokusho, and Kagemaro. You have a much better matchup against Gifts during games two and three, however overall these decks are very evenly matched. 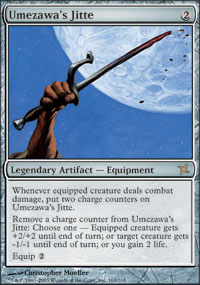 Hey, I wonder if this could be any good...
WWR
This is one matchup that my version of BG does much better in than the average BG. The addition of Loxodon Hierarchs and Umezawa's Jittes provide great help against the weenie beats, and the life gain aids in foiling a the burn to the dome strategy. Ultimately, it is merely a question of surviving long enough for the heavy hitters to come into effect. Try to save your removal for creatures that fly; ones that attack on the ground can easily be blocked. Umezawa's Jitte is the most dangerous card in both decks here, and can easily turn the tide by itself.

From the sideboard, Last Gasp is a definite include. There is not a single creature in the entire WWR deck with two or greater toughness, making it a sure kill, even against a Glorious Anthem. Necroplasm has been proving too slow in testing to have a serious effect here, and should be replaced. However the aggro matchups have been fine without him, so I'm not even sure what matchups I want to try and improve with those sideboard slots :halo:. That's an awful statement to make, but it’s true.

Conclusion Thingy That My Composition Professor Says Makes Articles Appear More Professional
Ironically, calling part of your paper a "thingy" makes it appear like it was written by chimpanzees, and I'm told my humor is about as funny as a funeral. But enough about me. Black Green control is a very strong contender in today’s Standard metagame with solid matchups against the anticipated field and it packs quite a punch for dealing with rogue strategies as well. Whether you are looking to fine tune your own BG deck, or simply want to figure out how to annihilate it, I wish you the best of luck. Until my next article, may you always play turn 2 Phyrexian Arenas.