Extended season is drawing to a close soon, so get your Grim Lavamancers and Vedalken Shackles out there while you can! Grand Prix Philly, next weekend, winds down the season, after which we get to see the effects of the new Extended rotation policy. The good news: you can play your Fetch lands one more year. The bad news: Duress and Cabal Therapy are still on the October chopping block.

I’ll be in Philly and should be doing event coverage for the mothership, so come up and say hi if you’re there.

You can also say hi to us at [email]cranial.insertion@gmail.com[/email], where our mailbag is full of rules questions. Today, we’re turning that mailbag upside down, shaking it, and seeing what falls out. We have questions on cards old and new, on formats competitive and casual. “Something for everyone,” that’s our motto. Well, it’s next in line after, “don’t feed the monkey.”

Here’s what was in the mailbag:

Q: My opponent has a Secluded Glen and a Swamp in play. He plays Vesuva copying the Glen. Can he show me a faerie card and have Vesuva come into play untapped? 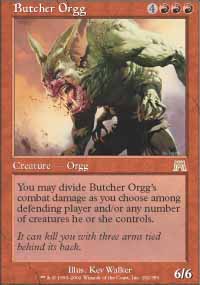 I DRINK YOUR MILKSHAKE~!
Q: I didn't see Butcher Orgg in the revised rules for "supertrample" in the Morningtide Update Bulletin. Can a blocked Butcher Orgg deal its combat damage to a planeswalker?

A: Certainly—if it's attacking a planeswalker and is unblocked. Otherwise, it does exactly what its ability says, which is assign combat damage to the defending player and some number of his creatures. This is nothing at all like "supertrample," where the attacker basically pretends it's not blocked. Nor is it anything like Supertramp, who sang songs like “Breakfast in America.”

Q: Can a creature like Silhana Ledgewalker be blocked by something with reach?

A: Not anymore. In fact, it was the introduction of the reach keyword ability that changed this interaction. In the CR for reach we see:

What does the Ledgewalker itself say about this?

Silhana Ledgewalker can't be blocked except by creatures with flying.

Q: I have a creature equipped with Deathrender and my opponent plays Akroma's Vengeance and destroys everything. Can I still bring a creature into play with the Deathrender? If so, will the attach ability still work?

A: The key here is that Akroma's Vengeance destroys all artifacts and creatures (and enchantments, for that matter) at the same time. Deathrender has a "leaves-play" ability, so the game will “look back in time” to the last moment the equipped creature was in play to determine whether or not Deathrender triggers. At that last moment, Deathrender was in play and attached to some creature, so it will indeed trigger and let you put a creature card from your hand into play.

However, since Deathrender is currently rending dead things in the graveyard, the "attach Deathrender to it" part of the ability will fail to do anything.

A: The Crusher’s ability is on the stack and is independent of the deceased Crusher in your graveyard. You’ll resolve the ability like you would if the Crusher were in play, except for the +1/+1 counters part. If a land is revealed, you keep flipping until you find a card that isn’t a land. This is all once instance of the ability.

Q: If I have a Doubling Season in play and then I play a Flash Foliage, do both the Saprolings block or does only one of them block?

A: Both tokens will have to block the targeted creature. Doubling Season simply doubles the number of tokens an effect would make. The extra tokens will be identical to the ones normally made, and will be bound by the same blocking restrictions. 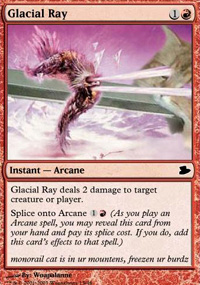 A: Arcane is not a creature type. Glacial Ray scoffs at your proposed tribal shenanigans and freezes your birds.

Bonus: This seems like a good time to point out just what the creature types are. You can find them listed in the CR glossary under “creature type.”

We at CI are still trying to get them to add Judge and Urchin to that list. So far, we have been unsuccessful.

Q: Can I Stifle Goblin Piledriver’s ability? What determines if a triggered ability is protected by protection from whatever?

A: Goblin Piledriver’s triggered ability is unprotected, so you can certainly target it with Stifle. Stifle targets only the ability, never the Piledriver itself. As far as I know, nothing in Magic will give an ability protection from anything.

A: Three questions at once? That’s cheating! Do you multiplayer fans have no shame?

There is actually one rule that covers all of these scenarios:

So in the first case, your O-Ring leaves the game and your opponent's permanent will return to play. [Whoops, this is wrong - 600.4c points out that the triggered ability from the leaving O-Ring will never be put on the stack. Sorry we didn't catch this in time.] In the second case, Confiscate leaves play and your opponent gets their pilfered permanent back. In the third case, Arrest leaves play, and your opponent's creature is free to do mean things to people again.

Q: I have Magus of the Moon and Yixlid Jailer in play. I somehow sacrifice Dark Depths and then play Second Sunrise. Will Dark Depths come into play as a Mountain with ten ice counters?

A: Actually, yes, it will. With the Future Sight CR update, we got a new rule to handle wacky Jailer interactions. It’s 419.6i and it says,


Basically, it means you ignore continuous effects that are not native to the object coming into play (like the Jailer’s) when you’re figuring out which effects to apply. Thus, Dark Depths comes into play with 10 ice counters on it (its own replacement effect) and as a Mountain (Magus of the Moon’s continuous effect, which we apply because it’s very much a part of a nonbasic land coming into play). 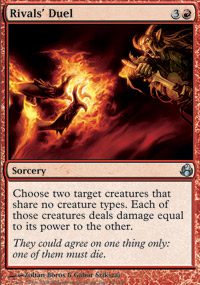 In this case, Benthicore is an illegal target, so Rivals’ Duel can’t make it deal damage, nor can it make the Winnower damage it. There’s still one legal target (Winnower), so the Rivals’ Duel isn’t countered, but it might as well be, since it won’t do anything.

Q: Does Suppression Field have an effect on flashback?

A: Other than to point and wave, not really. Flashback represents two abilities: a static ability that lets you play the spell from the graveyard by paying its flashback cost, and the static ability that makes sure a spell played that way gets removed from the game. Since neither of those are activated abilities, Suppression Field won’t affect a flashback spell in any way.

Q: I have Leaf-Crowned Elder in play. It's my upkeep and the kinship trigger goes on the stack. I look at the top card and find Verdeloth the Ancient. I choose to reveal it and then choose to play it without paying its mana cost. Can I pay the kicker cost of X?

A: You can. When a card says, “play it without paying its mana cost,” it really means, “pay it without paying what’s printed in the upper right corner (or down the left side for those bloody hideous cards in Future Sight).” I bet you never knew abilities could be so wordy or so opinionated. When you play a spell without paying its mana cost, you are required to pay any mandatory additional costs (a la Sphere of Resistance), and have the choice of paying optional additional costs, like kicker. So you can feel free to pay X and kick your Verdeloth. Just not too hard, since you might break your foot.

Q: For Tarmogoyf, do tribal instants and regular instants count as two different types? If so, why don't creatures and legendary creatures count separately?

A: A tribal instant has two card types—tribal and instant—and will be counted as two types when Tarmogoyf is figuring out his power and toughness. The card types are listed in the CR (205.2a), and are printed as reminder text on the ‘Goyf itself. Legendary, as a supertype, is not a card type and won’t be counted by Tarmogoyf. The same is true for the other supertypes (basic, snow, and the one everyone forgets. . . .)

Q: Let’s say I have two Sensation Gorgers in play; if I can stack the deck with a shaman before my upkeep, triggering the first kinship, do I have a chance to Spin into Myth another shaman before the second one triggers?

A: Not before it triggers, but you can do that before it resolves. At the beginning of your upkeep, the kinship abilities of both Sensation Gorgers will trigger. We’ll call these Gorger1 and Gorger2, resolving in that order. You reveal a shaman for Gorger1, then do the mini-Wheel of Fortune ability. With Gorger2 on the stack, you can play Spin into Myth and put another Shaman card atop your library, which Gorger2 will see when it resolves.

Bonus: You can find the latest card wording in Gatherer, which is always updated with the latest Oracle wordings.

That’s all we have for this edition of CI. Next week: Root Elemental and Root Greevil lobby for their own errata.