[This article is available in Spanish here.] 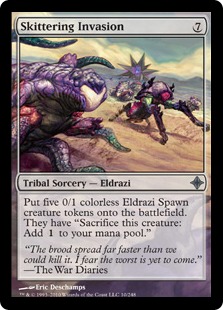 The worst is yet to come!
Welcome to the first Cranial Insertion since the official release of Rise of the Eldrazi! If you attended a prerelease or release event, I'm sure you had lots of fun and enjoyed all the intricate card interactions that Rise of the Eldrazi has to offer. Early indications are good that this set will generate lots of interesting rules questions. Our inbox at [email]cranial.insertion@gmail.com[/email] has been overflowing, and Moko is doing his best to keep up.

So, let's go ahead and annihilate some of those questions. We'll start off with a couple of leftover pre-Eldrazi questions, and then we'll jump into the post-Eldrazi world with a follow-up question to last week's article.

Q: If I control, say, ten creatures with lifelink and they all deal combat damage to my opponent, how many times does Cradle of Vitality's ability trigger?

A: It triggers 10 times. While all damage is dealt simultaneously, it's still dealt separately by each attacker, so it results in separate life gain instructions, triggering the Cradle's ability that many times. (Note that this is a change from previous rulings, so something you find from six months ago won't be accurate anymore.)

Q: If I use Phthisis on a Marit Lage token, will my opponent lose 40 life even though the token can't be destroyed?

A: Ouch, yes! When Phthisis resolves, it does as much as it can, and the life loss doesn't say that it's contingent on the targeted creature being destroyed. Phthisis can't destroy the token, so it doesn't, but it can subtract 40 from your opponent's life total, so it does.

Q: In the last issue, you implied that Paradox Haze would cause Staggershock to rebound twice. How does that work?

A: It doesn't, and that's not what Eli meant. What Eli meant is that with Paradox Haze, a Staggershock can kill a creature with toughness 4 if you cast it in your first upkeep step. It'll then rebound in the second upkeep you get thanks to Paradox Haze, so you can finish off the x/4 by dealing 2 more damage to it. Sorry if it was unclear!

Q: My opponent controls Sorin Markov and I swing at Sorin with Ulamog's Crusher. When the annihilator ability resolves, my opponent sacrifices Sorin. Does the Crusher attack my opponent now?

A: No. The Crusher is still charging in the direction of the Sorin-shaped puff of smoke where Sorin just was. Unless your opponent blocks the Crusher -- which he'll probably only do if he has a blocker that can kill the Crusher -- it won't deal any combat damage to anything.

Q: If I use Goblin Tunneler's ability to make my Kiln Fiend unblockable, and then cast a bunch of spells after the ability resolved, will Kiln Fiend still be unblockable?

Q: The big Eldrazi legends all say that their owner shuffles his or her graveyard into his or her library when they go to the graveyard. Does this mean that the big dude hits the graveyard first and I can respond with Suffer the Past to exile it?

A: It sure does. The Eldrazi titans have regular triggered abilities that use the stack and can be responded to. Until the ability resolves, the titan is sitting helplessly in the graveyard and can be exiled with Suffer the Past. 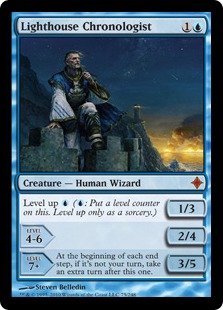 What's better than one turn?
Two turns in a row, of course!
Q: I control a Lighthouse Chronologist that's on level 7 and my opponent casts Emrakul, the Aeons Torn on his turn. How do the extra turns work out?

Q: If I sacrifice Kiln Fiend to a Momentous Fall, how many cards do I draw?

A: Only one. Momentous Fall isn't actually cast until just after you have paid its costs. At that moment, Kiln Fiend is already in the bin, so it's not around to see you casting Momentous Fall. Its power was 1 when it went to the graveyard, so you draw one card.

Q: If I kill my opponent's Soul's Attendant with Spawning Breath, does he still gain 1 life from the Eldrazi Spawn token entering the battlefield?

A: He sure does. Soul's Attendant won't be destroyed until the state-based action check that happens after Spawning Breath has finished resolving, so Soul's Attendant sees the mana baby entering the battlefield and its life gain ability triggers. Once an ability has triggered, it's independent from its source, so the life gain still happens even though Soul's Attendant has been destroyed by the time the ability is put on the stack.

Q: If I hit my opponent's Eldrazi Spawn token with Spawning Breath and he sacrifices it in response, do I still get a mana baby of my own?

A: Nope, no mana baby for you. Spawning Breath only has one target, and it became illegal when your opponent sacrificed his token. This means that Spawning Breath has no legal targets, so it's countered on resolution and none of its effects happen.

Q: If I cast Chord of Calling, can I tap my mana babies for convoke before sacrificing them for mana?

Q: My opponent controls a Level 0 Student of Warfare that has a Snake Umbra attached to it, so it's 2/2, and there are no other Auras on the battlefield, so my Aura Gnarlid is 3/3. What happens if I block the Student with the Gnarlid?

A: You won't like the result very much. The Gnarlid deals 3 damage to the Student, and the Student deals 2 damage to your Gnarlid. The Student has received lethal damage and should be destroyed, but instead the damage is removed from the Student and Snake Umbra is destroyed. Seeing the Aura die makes the Gnarlid very sad, and it shrinks to 2/2 immediately. Suddenly, the 2 damage marked on it is lethal, and the Gnarlid is destroyed.

Q: My opponent has a Glory Seeker with a Bear Umbra attached to it. If I hit it with Vendetta, do I lose any life?

Q: My opponent got another Glory Seeker with a Bear Umbra on it, and he attacks me with it. I block it with a Level 1 Nirkana Cutthroat, a 4/3 deathtoucher. Is the combination of lethal damage and deathtouch enough to kill both the Glory Seeker and the totem armor on it?

A: Nope, sorry. The destruction due to lethal damage and the destruction due to deathtouch happen simultaneously in one state-based action check, so one replacement effect is enough to replace both of them. The totem armor is destroyed, but Glory Seeker lives on to seek glory. 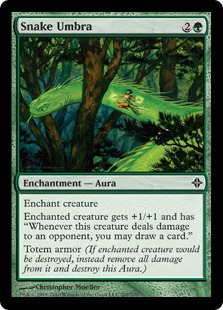 Totem armor, the unrivaled champion of
generating prerelease rules questions.
Q: My opponent has a 1/1 creature with two Snake Umbras attached to it, so it's 3/3. I shrink it to 1/1 with Guul Draz Assassin's Level 2 ability and then ping it with Brimstone Mage's Level 1 ability. What happens?

A: That'll kill his 1/1 very effectively. It'll be a 1/1 with 1 damage on it, so state-based actions want to destroy it. This gets replaced by one of the Snake Umbras being destroyed instead and the damage being removed from the creature. It is now a 0/0 creature, so it is put into its owner's graveyard. This is not destruction, so the remaining totem armor is powerless to prevent the creature's demise.

Q: If I have a Brimstone Mage on the top of my library, can Skill Borrower use the Mage's damage ability?

Q: Can I target the same creature multiple times with Wrap in Flames?

Q: What happens if I cast Realms Uncharted and then realize that I only have lands with two different names in my library?

A: Realms Uncharted resolves and does as much as possible. Since you're searching a hidden zone for cards with certain criteria, you can fail to find some or all of the cards the spell is asking for. This means that you can find two, one, or even no cards. If you find two cards, your opponent chooses both of them and puts them into your graveyard. You put no cards into your hand, and then you shuffle your library.

Q: I control Sovereigns of Lost Alara, attack with a single creature, and attach Eldrazi Conscription onto the lone attacker with the Sovereigns' ability. Do I get to annihilate two of my opponent's permanents?

A: Maybe later, but not now. Annihilator triggers when the creature attacks, and that moment has already come and gone by the time the Conscription gets attached to your attacker. It will trigger the next time it attacks, though.

Q: I control Cast through Time, so all my instants and sorceries have rebound. If I cast a kicked spell, is the rebound kicked, too? What about spells with X costs, such as Comet Storm?

Phew! That's enough brain-melting Eldrazi mayhem for now. Next time, Brian will be back with more.

Before I sign off for now, I'd like to remind you again that an exciting event is coming to Toledo, Ohio in just under three weeks. I am organizing Cast a Spell on MS, a charity Magic tournament that will benefit the National MS Society. If you're in the area on May 15th and aren't going to a Nationals Qualifier tournament, come on over to the University of Toledo and help us raise money for a good cause while playing the game you love. I hope to see you there!

Until then, may all your Eldrazi be huge and devastating!