Creatures die in Magic. A lot. Sometimes, however, there can be confusion as to when a creature is put into the graveyard, when it is exiled, what regeneration can do to prevent these terrible fates from befalling creatures, and so on. If these are some of the issues you have contemplated, then this article is for you.

How can creatures die? 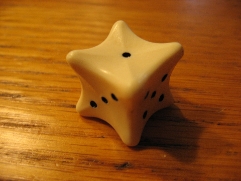 The only form of "die" found in
the Comprehensive Rules.
The question "How can creatures die?" is somewhat misleading in that there is no real concept in the rules of a creature "dying." Instead, the game looks for particular events or game states to occur and then reacts in a particular way, depending upon what it saw. In this sense, saying that a creature "died" is not really useful because it doesn't really explain what happened. In fact, the comprehensive rules don't even contain the word "die," except in reference to multi-sided objects used to generate random numbers or events. So, when a player says that a creature "dies," he usually just means the creature has been put in the graveyard or exiled. Semantic banter aside, let's look at the ways a creature might leave the battlefield.

Someone casts Wrecking Ball targeting Squire, Wrecking Ball resolves, and Squire goes away. Easy. These cards specifically use the word "destroy," as opposed to "exile" or "return to hand" or something like that. "Destroy" has a very specific meaning within Magic; it is not interchangeable with any effect that causes a creature to leave the battlefield.

Not all "destroy" cards are created equal however. A card like Terminate also has an extra sentence specifying that a creature destroyed by it can't be regenerated. I'll talk about regeneration a little more later, but just be on the lookout for this. Also, some older cards, like the original Dark Banishing from Ice Age, used the term "bury" to mean "Destroy target
Posts Quoted:
Reply
Clear All Quotes
Read Next