Sign In Register
2019 Holiday Exchange!
A New and Exciting Beginning
The End of an Era
Cranial Insertion
There are Games Besides Magic?
By Eli Shiffrin, Brian Paskoff, and Carsten Haese 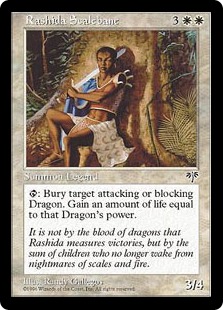 Slayin' dragons.
Hello, and thanks for taking time out of playing Skyrim and/or Modern Warfare 3 to read our article this week! We're also a few days away from the last ever big Worlds, so if you're a Worlds player/pro-Call of Duty/dragon slayer you're having a busy week. By the time you read this I'll be slaying a whole bunch of dragons in Skyrim, and thank god my article was due before that game came out!

If you're an aficionado of good games (such as the Elder Scrolls series, Modern Warfare series, and that Magic: The Gathering game), and want to get back to them, I won't keep you too much longer - just email your questions to [email]Cranial.Insertion@gmail.com[/email], tweet them to @CranialTweet, and read the ones below you might've sent in before!

Q: Arena has been errated to use the "fight" keyword, but why not Vein Drinker?

A: The original text for Arena uses just one verb, so it all happens simultaneously. Vein Drinker says it deals damage, period, and then the other creature deals damage back. That means if you give your Vein Drinker infect or wither the targeted creature will be shrunk before it hits back.

A: Putting your commander in the command zone when it dies is a replacement effect that replaces it being put into your graveyard. In order for a creature to "die", it has to be put into your graveyard from the battlefield, and even though that's where it normally would head, you cutting it off and sending it to the command zone means you're safe from the likes of Falkenrath Noble or Vicious Shadows. It is still being destroyed, so when the daggers fall your opponent will still lose 2 life for that creature.

Q: With a Tomorrow, Azami's Familiar and me popping the divinity counter off a Myojin of Seeing Winds with seven permanents out, how many cards do I look at before I draw?

A: Just three at a time! "Draw seven cards" is like saying "Draw a card" seven times, so you'll apply each replacement effect as they come up. You'll dig through quite a bit of your deck, but not all at once.

Q: If I put a fate counter on Oblivion Stone will it save itself from being sacrificed when I blow it up?

A: Being sacrificed isn't the same as being destroyed. Even though Oblivion Stone can target itself, that's usually a waste - all it'll do is protect other Oblivion Stones from destroying it when they're activated.

Q: How does the timing work with Sheoldred, Whispering One's first triggered ability work? A player wanted to put the ability on the stack, cast Forbidden Alchemy, then choose the target creature to return to the battlefield. Can he do that or is he required to choose the creature when the ability goes on the stack?

A: At the beginning of his upkeep, the ability goes on the stack. He picks a target for it right then, before it resolves and before he even gets priority to cast a spell like Forbidden Alchemy to try to dump more juicy reanimation targets in his yard. 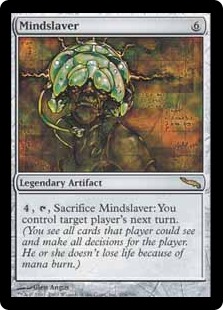 Some day we'll be playing games like this.
Q: If I Mindslaver my opponent, can I target them with their own spells that say "target opponent" such as Cruel Ultimatum?

A: Even though you might be holding their cards, tapping their mana, sitting in their chair while they get up to get a drink (that's what I do when I get Mindslavered, I can't bear to look!), they're still casting the spells - you're just making all their decisions for them. A player is never their own opponent, even if they're making the wrong decisions - forced or otherwise.

Q: If I make Garruk Relentless into a Human by way of Liquimetal Coating, March of the Machines, and Xenograft, or some other way, can I transform him with Moonmist?

A: Garruk will be an Artifact Creature Planeswalker - Garruk Human, and he'll transform from Moonmist just like any other Human that's a double-faced card.

Q: If I attack with a Guiltfeeder, and my opponent with no blockers uses Maze of Ith on it, does the life-loss effect still happen?

A: Yes, it will. Since Maze does not remove the Guiltfeeder from combat it will still feed on all of those life points from your opponent since he has no blockers to declare for the feeder.

Q: My opponent swings at me with a Night Revelers and I block with a 5/5 Demon token. He plays Moment of Heroism on his Revelers... can I play Ranger's Guile in response on his creature to prevent the Heroism from resolving? In short, if I make an opponent's creature have hexproof, who can target the creature with spells or abilities?

Q: If I put a Curiosity on my opponent's creature and it damages me, who draws a card?

A: Sadly, no. Essence of the Wild has to be on the battlefield for its effect to apply. It's coming in at the same time as everything else now, so they'll all be regular Ornithopters, Memnites, and so on. Hopefully you left some of those 0 casting cost creatures in your hand or library to cast later!

Q: I decided to Crib Swap my opponent's Chainer, Dementia Master. My understanding is that all of Crib Swap resolves at one time, removing the creature and granting a changeling which is summarily exiled by Chainer's leaves play trigger. My opponent and another bystander claim that because of the period between the two sentences in Crib Swap, Chainer's leaves play trigger intervenes and exiles nightmares before the changeling enters play, leaving him with a token at the end. I thought you couldn't interrupt the resolution of a spell. Who's right?

A: You are! Don't you love when that happens? Things can trigger during the resolution of a spell just fine, but they won't go on the stack until after that spell has finished resolving. Once Crib Swap finishes resolving, he'll have a token in play that's a Nightmare - along with every other creature type in the game - and Chainer's triggered ability will exile it.

Q: I have a Phantasmal Image copying my Precursor Golem, the latter of which has long since been sacrificed to a Birthing Pod so my Golems would be safe... or so I think! If someone targets my Phantasmal Image'd Precursor Golem with an Ancient Grudge, won't the Illusion's "sacrifice me" trigger save my other Golems from having Grudges made for them?

A: When your Illusionary Precursor Golem gets targeted by a spell with a single target, two things will happen: The standard Illusion "Oh no, I was targeted! Sacrifice me!" ability will trigger, and Precursor Golem's "copy this spell for other Golems!" ability will also trigger. Yes, you can put them on the stack in any order you want, but it doesn't matter which order they resolve in - both are going to happen. 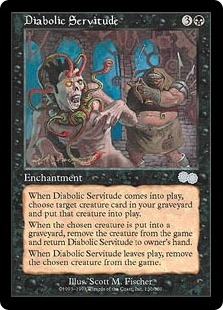 I like playing games on my monitor.
The Monitor likes playing his games
on other people.
Q: I've got a Plague Sliver and two Essence Slivers out; will I gain double the life I would have lost?

A: You will! Essence Sliver hasn't been errated to give Slivers lifelink; it just gives them a triggered ability that works how lifelink used to work before Magic 2010. When your Slivers deal you damage, their life-gaining triggered abilities will trigger, and gain you 2 life for each 1 damage you were dealt.

Q: If I Clone my opponent's Dread Cacodemon, will all my opponent's creatures blow up while mine are tapped, or do I just get a boring old 8/8?

A: That depends how the Clone entered the battlefield. If you cast it from your hand and choose to copy the Cacodemon, the Clone that becomes Dread Cacodemon will see where it was cast from and you'll get to wipe your opponent's boards. If you cast it from a zone other than your hand, or just put it directly onto the battlefield, then you won't get to Plague Wind away anything.

A: Since you choose a creature type as Adaptive Automaton enters the battlefield, it's a Human by the time it would trigger Champion of the Parish's ability, so it does! Your Champion will get a +1/+1 counter, and another +1/+1 bonus since it's a Human as well.

Q: Can I cast Goblin Grenade and decide to sacrifice my Ember Hauler, then pay 1 to shock my opponent for 2? Does he take 2 damage and 5 damage?

A: There's no way to make this happen. Sacrificing your Ember Hauler is part of the cost to cast Goblin Grenade, so you're sacrificing it as one of the steps to cast the spell. Except for mana abilities, you can't activate abilities in the middle of casting a spell. And once the Goblin Grenade is on the stack and you have priority, your Ember Hauler is already in the graveyard.

Q: My opponent decides to give me an Illusions of Grandeur with Donate, which I obviously don't want! Can I Commandeer the Donate and make him give it to himself or another player?

Q: I was curious if there was a rule stating how to approach Fact or Fiction/Sphinx of Uthuun in Commander. Is it acceptable for the opponent I choose to make the piles to discuss the choices with the other players?

A: How your group handles it is up to your playgroup, but there's nothing stopping players from talking about revealed cards! It might seem unsporting to you to have your opponents all talk about the best way to give you the worst choices, but every multiplayer Commander game is full of political talk like "Attack him!" or "Don't kill my planeswalker!". It's just part of the game!

A: No such luck there, the +1/+1 counters only modify the power and toughness of the creature they're on. If they're not on a creature, they still stay on that permanent, but don't do much of anything unless that permanent somehow turns into a creature again. You'll have to settle for your Sword only being really good instead of really, really good!

Off to kill more dragons! See you next time!