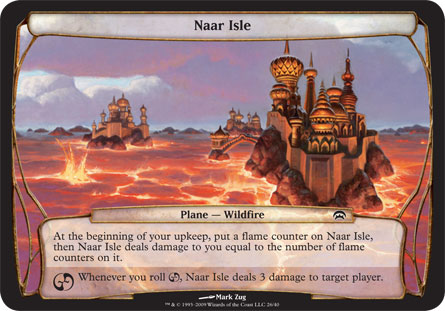 How most Planechase games end.
So Wizards announced the new set of Planechase, coming mid next year. This is great news (aside from the six months away thing), because my Commander playgroup has been loving Planechase lately. I've got all the plane cards, so we've just been playing with one big stack in the middle to rotate through. This has led to some very odd rules questions, as you'll see below in the Q&A section!

If you've got any rules questions, send them to [email]cranial.insertion@gmail.com[/email] or tweet them to @CranialTweet!

Q: Can I proliferate a Naar Isle's flame counters so the next player takes even more damage?

A: No, this won't work. You can only proliferate players and permanents, and Planechase planes are neither. Permanents only exist on the battlefield, and plane cards sit in the command zone with all the commanders that have not been cast.

Q: If someone rolls a chaos or planeswalker symbol, can I respond, for instance floating mana or casting a spell?

A: The rules for Planechase say that when you roll the chaos or planeswalker symbol, the appropriate ability triggers. And anything that triggers uses the stack, so players will get a chance to cast spells and activate abilities before the chaos happens or the next plane shows up - handy when you want to squeeze more mana out of Eloren Wilds, or tap some lands in response to The Eon Fog's chaos trigger.

Q: We're playing Planechase with Commander (the best way to play it), and Bant gave my Skullbriar, the Walking Grave a divinity counter. It went to the graveyard due to an All is Dust, but if I bring it back onto the battlefield later, will it still be indestructible?

Q: If Tember City is the active plane and my opponent rolls chaos, do I sacrifice anything if I control a Tajuru Preserver?

A: Nope! The active plane is controlled by whoever's turn it is, so that's your opponent's Tember City asking you to sacrifice a permanent, and Tajuru Preserver says no to that.

A: You do! You controlled Wurmcoil Engine when its ability triggered, so you'll control that triggered ability too, and get two tokens to add insult to any injury you may have done when you attacked with it.

Q: If I clone a Serra Avatar with Quicksilver Gargantuan, is it a 7/7 or a my-life-total/my-life-total?

A: It'll just be a 7/7. When copying something that has a characteristic defining ability setting its power, that CDA isn't copied if the copy effect defines a power instead. 706.9d is the rule in question.

Q: I've got a Necrotic Ooze on the battlefield and two Skinshifters in my yard. How many times a turn can I change Necrotic Ooze into a Rhino, Bird, or Plant?

A: Up to two times. Each Skinshifter gives it another identical copy of Skinshifter's ability, and each of those abilities can be used only once a turn.

Q: I control a Darien, King of Kjeldor and get attacked by a Balefire Dragon. Do my Soldier tokens live?

A: When a player gets attacked with Balefire Dragon, both the Dragon and Darien's abilities trigger off the damage being dealt. Since the attacker is the active player, their Dragon's ability will go on the stack first, then Darien's. Darien will make tokens, and then they'll get wiped out by the Dragon. 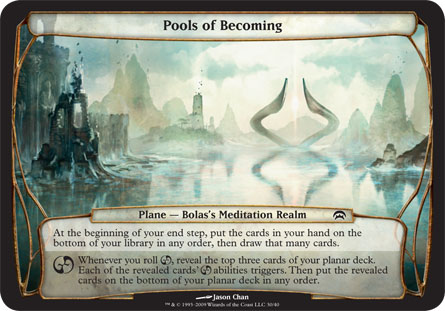 Super chaosy!
Q: Can I target a Timely Reinforcements with Spellskite just so I go to a lower life total than my opponent, or do I need to target a spell that actually targets?

Q: In a one-on-one Commander game, do I draw a card for my first turn if I'm on the play?

A: Many people play multiplayer Commander and assume that the "draw on the play" is a Commander specific rule. It's not - it's a rule that's specifically for multiplayer Magic, not Commander as a whole. In one-on-one duels, you skip your first draw step if you're on the play just like any other one-on-one format.

Q: Do regenerating creatures lose counters when they come back from the graveyard?

A: No; in fact, regenerating creatures never even hit the graveyard! Many new players are confused by regeneration, sometimes even thinking that the creature needs to have just died for you to pay its regeneration cost and put it back onto the battlefield. In reality, activating a regeneration ability means "After this ability resolves, the next time this creature would be destroyed, instead it's tapped, all damage is removed from it, and if it's in combat, it's removed from combat". All counters and other effects still apply to it because the creature never changes zones.

Q: I know that Snapcaster Mage can't let you cast a Force of Will for cheaper because you can't pay two alternate costs. What about Blasphemous Act - does the spell still get cheaper for each creature on the battlefield?

A: Yep! Blasphemous Act doesn't have an alternate cost, it just has a cost reduction effect. When you're casting the spell using flashback, you take into account anything that changes the spell's cost, so Blasphemous Act will cost 1 less for each creature on the battlefield.

Q: If I say "Enter combat?" and my opponent plays a spell to tap down one of my creatures, I know I'll get priority again before I attack... but are we still in my main phase, where I can play lands and sorceries before I declare attackers?

Q: I was thinking about using Balthor the Defiled as a commander. When paying the cost for his activated ability, can I choose to replace the exile with moving him to the command zone and still get to bring back creatures from the grave (along with whoever is playing red)? I know that going to the command zone replaces exile. But on the other hand, that requires some event that can actually be replaced.

A: It doesn't matter where Balthor ends up; you paid the cost, so you'll get all your creatures back! 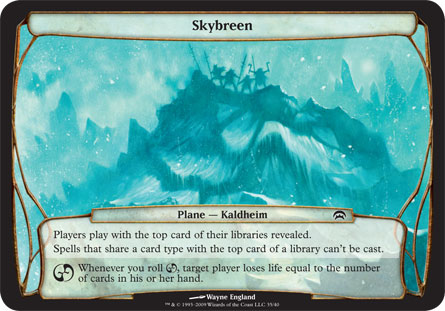 FUS RO DAH!
Sorry, wrong game.
Q: Are commanders "Super Legendary"? If two people are playing Kaalia of the Vast, can they both be out at once?

A: Only until state-based actions are checked. That rule went out around the time Elder Dragon Highlander became Commander, and now commanders follow all the rules for legendary creatures.

A: Yes, you'll still shuffle. The copy of the spell will go where it's supposed to go - into your library in this case - before it ceases to exist.

A: Yep! Like most abilities, shroud only works while the creatures is on the battlefield. While the card's in your graveyard, you can target it with anything you want that targets cards in graveyards.

Q: I have Mesmeric Orb and Mortal Combat out, but only nineteen creature cards in my graveyard. If I untap at the start of my turn and mill another creature card, will I win the game?

A: Since no player gets priority during the untap step, anything that triggers during that step won't go onto the stack until the first time a player would get priority, which is the beginning of your upkeep. By the time those triggers resolve and you hopefully mill at least one more creature card, it's past the time Mortal Combat would have triggered.

Q: My opponent taps out to Banefire my Vorinclex, Voice of Hunger. My Shisato, Whispering Hunter then goes in to deal combat damage. It's clear that his lands won't untap next turn because of Vorinclex slowing them down. Will they also not untap that player's following turn because Shisato made them essentially skip the untap step in which they were supposed to have a delayed untapping?

Q: I know I have a DCI number, but I've forgotten it. What do I do if I want to play in an event?

A: The new(ish) Wizards Event Reporter program has access to a massive database of everyone's DCI number, so they'll be able to search for you. Bigger events like GPs and the like use an older version of the program that doesn't necessarily have this, so the best thing to do is to call your local store and ask them to look up your DCI number in their local player database for you before the tournament.

That's it for me! Happy holidays everyone!