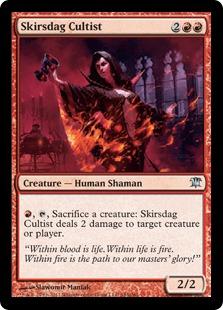 Kill the Cultist!
Dust off your Halloween costumes, because it's time for another spooky day in the Magic world! Dark Ascension's prerelease is this weekend, and if the name of the third set in this block, Avacyn Restored is any clue, this might be the end of the vampires, werewolves, spirits, and zombies when Avacyn comes back. We've still got a few months of Dark Ascension - Innistrad drafts to get through first, and of course a whole batch of scary new questions about the new cards… but you'll have to wait until Monday for those when Eli gets to do his usual prerelease article thing.

By the way, the last few questions in this article have card names who are references to another card game with "Ascension" in its name - not as fun or scary as Magic's newest expansion, but see if you can guess it!

And send in your rules questions to [email]cranial.insertion@gmail.com[/email], or Tweet them to @CranialTweet! We'll get to them as soon as we can or even sooner. (We're pretty good at this after this many years.)

Q: If there's a Chalice of the Void on 1, and I cast Flusterstorm, do I still get copies? Are the copies countered?

Q: My Copper Myr is getting stung with a Virulent Wound, so I cast Giant Growth targeting it so it survives this turn. But when the turn ends, do I get a poison counter or not?

A: You will. Things that trigger during "this turn" aren't continuous effects, so when Giant Growth wears off in the cleanup step, Virulent Wound is still waiting for the creature to die, trigger, and give you a poison counter.

Q: What happens if False Prophet is destroyed at the same time as a bunch of other creatures with a Day of Judgment?

A: Then it turns out that Prophet wasn't entirely wrong about the end being near! But he'll be in the graveyard just like every other creature. Sure his trigger will go off, but as all the creatures previously on the battlefield are now in the graveyard, he's not going to exile anything. Unless there's some indestructible creatures left over, or creatures that somehow got onto the battlefield in between Day of Judgment resolving and False Prophet's trigger resolving.

A: It's actually a lot simpler than that. Radiate resolves, putting a copy of Bolt onto the stack targeting everything Lightning Bolt could target. This makes Grip of Chaos trigger, reselecting all those targets at random. But Radiate has already done its thing and resolved, so it doesn't have any other say in what any of the Bolts are targeting.

Q: If my commander is Sen Triplets and I control a Celestial Dawn, can I play anything from my opponents' hand by spending W?

A: Sure! You can spend white mana as though it were mana of any color. Since your commander has white in its color identity, you can generate that white mana and spend it to cast anything you want - even if it's a spell that doesn't have W, U, or B in its mana cost.

Q: In a Two-Headed Giant game, if I have a Glacial Chasm and a Blazing Archon, can my opponents just attack my teammate? Can my teammate attack even if I can't?

A: In Two-Headed Giant, if a player can't attack one player on a team, then they can't attack that team at all, because you're attacking a team, not a player. Glacial Chasm only prevents you from attacking though, not your teammate, so he can attack all he wants!

Q: What happens if Chaos Orb gets shuffled into my library before its ability resolves? I know this can't happen in a sanctioned event, but the rules cover everything on printed cards, don't they?

A: You're right! This'll never happen in a sanctioned game, but just in case you're wondering, Chaos Orb's current Oracle text specifies that it only does its flip-of-doom if it's on the battlefield when the ability resolves. The official database for Oracle text, which includes every card ever made with up-to-date templating, is called Gatherer. As someone who judges lots of Vintage tournaments, it's generally safe to assume that cards printed when the game came out have undergone some kind of templating changes. Except Stream of Life, though that doesn't see a lot of play these days in Vintage. 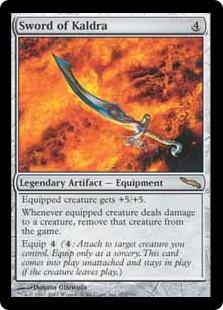 A: Well, the Sword of Kaldra has some pretty weird templating. It looks like it's written as if it will exile any creature its wielder damages, but that isn't necessarily true. For the Sword's trigger to go on the stack, first state-based actions need to be checked. Any creature with toughness 9 or less is going to take 9 damage, be put into the graveyard due to state-based actions, and then the Sword's trigger will go on the stack… and do nothing because the creature isn't there anymore. If the creature had survived, it'd be successfully exiled when the trigger resolves.

Q: What happens when someone gets two last picks in an FNM draft? Obviously that means someone messed up along the way, but what do we do?

A: Well, there's no official policy on this, but the way I usually handle it as head judge is to tell the players to be more careful passing packs and to just continue on. Many tournaments practice "zone drafting" where players can't pass a pack if there's one already there, so it's much less likely for a pack to get mixed up with another one or a card to get left behind. And at GPs and other Competitive level events, there's judges walking around helping to make sure nothing is going wrong.

Q: If I control a Platinum Emperion and get hit with a Balefire Dragon, do my creatures still take damage even though I'm not dealt any?

A: Oh, but you are being dealt damage! Just because your life total isn't changing doesn't mean the damage is prevented. You'll be fine, but your creatures are going to get nuked. Luckily your Platinum Emperion is an 8/8, huh?

Q: Do Chronozoa tokens make copies if they die without any counters on them?

A: They sure do! The copies of Chronozoa are identical copies of it, so they come in with time counters and lose them as normal, and when they go to the graveyard, they'll trigger if they had no time counters on them and spawn even more amoebas.

A: Guile replaces the actual countering with "exile it, then cast it." Even if he moves it to the command zone, since that's the first place it went to, Guile's trigger can still find it and you can cast it.

Q: Does Champion of the Parish get a +1/+1 counter when I cast an Adaptive Automaton and choose Human?

Q: I have a Sire of the Storm on the battlefield and cast a Reach Through Mists, which is summarily exiled under my opponent's Eye of the Storm. How many times does the card draw trigger on Sire go off? Once or twice?

Q: Can I ditch my hand of zero cards to counter a spell with Null Brooch?

A: Strangely, yes! Well it's only strange if you're familiar with other types of card games, which have different logic and wouldn't let you pay a cost involving discarding your hand when you don't have enough cards in it to discard. In Magic though, that logic works perfectly - you always have a "hand", even if it's zero cards, so you can activate Null Brooch no matter what.

A: It'll let you get two uses out of it, but not infinite. All the permanents Disk tries to destroy are attempting to be destroyed at the same time, and since That Which Was Taken is still on the battlefield, it's still making Nevinyrral's Disk indestructible. But then the legendary artifact is gone, and so is its static ability that says permanents with divinity counters on them are indestructible.

There is a certain artifact in Darksteel that'll make your Disk permanently indestructible, but it can also be combined with another artifact from Mirrodin block that'll make everyone you're playing Commander with hate you.

Q: Is there any way to get rid of emblems?

A: Sure, kill the player who has it! In-game I mean; Venser's emblem is frustrating to play around, but physical violence will get you thrown out of tournaments. Emblems aren't cards, tokens, or permanents, so nothing in the game currently will remove them.

Q: Stoneforge Mystic is banned in Modern, but could I still play the "War of Attrition" deck in a Modern tournament?

A: That weird little loophole allowing Stoneforge Mystic to be played after it was banned in Standard, but only in an unaltered War of Attrition deck, was a benefit to players who bought the theme deck to allow them to play it at their FNM. If they altered it in any way, the first change would need to be to swap out that Stoneforge Mystic for something probably less useful. That announcement came about before Modern became a thing, but since the War of Attrition deck isn't being produced anymore and Modern isn't an FNM format that someone will need an emergency deck for, there's been no announcement about that deck being legal in Modern. 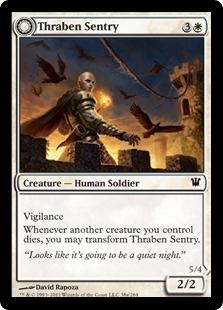 It's not the worst MTGO
misclick you can make.
If you've ever had someone
accidentally F6 past their first turn
and concede, chances
are it was me!
Q: In a match on Magic Online, two of my creatures died but a Thraben Sentry survived. I hit "Yes" twice to the transform trigger, and it transformed into Thraben Militia… and then right back! Is that correct? Thraben Sentry isn't a werewolf, it doesn't say anything about transforming back.

A: It is correct, but this kind of thing isn't very likely to happen outside of MTGO since the trigger is invisible in real life. Each trigger will transform the permanent that is Thraben Sentry when the trigger resolves, whichever side is showing at the time.

Q: Can I make a token with Stitcher's Apprentice, block with it, then sacrifice it so I don't need to sacrifice another creature?

Q: Can I sacrifice Skirsdag Cultist to itself, or I do I need another creature?

A: The Cultist will gladly sacrifice itself in the name of Skirsdag! The cost says to sacrifice a creature, not "another" creature, so you can have the Cultist fling itself for 2 damage.

And that's all for me this week! Eli will be here next week with some great Dark Ascension questions, so swing by after prerelease weekend!