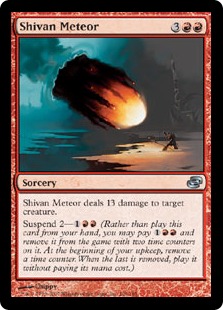 Yup, that guy seems
pretty unlucky.
One of the more common non-rules related questions I overheard at the Dark Ascension prerelease was "What's the deal with the number thirteen everywhere again?" It seems that even in the United States, one of the many countries where thirteen is considered an unlucky number, not everyone's familiar with the superstition. There are lots of reasons for thirteen being an unlucky number, but it seems all of Innistrad is triskaidekaphobic as well. The number is sprinkled on a lot of cards in the set to go with the horror theme, but unfortunately for us, Friday the 13th doesn't fit our article release schedule. Tuesday the 13th is unlucky in a few Spanish-speaking countries, but Monday the 13th is only unlucky if you forgot tomorrow was Valentine's Day and you need to get flowers for your significant other. And by significant other I mean us, and by flowers I mean a bouquet of Black Lotuses.

The only good part of Monday is that Cranial Insertion is published then, so keep sending in your questions to [email]Cranial.Insertion@gmail.com[/email] or Tweet them to @CranialTweet!

Q: How does undying work with token creatures, if I give them undying with Mikaeus, the Unhallowed?

A: Not very well. They'll go to the graveyard and undying will trigger, but before the trigger goes on the stack, state-based actions are checked. They find that a token creature isn't on the battlefield, so the token ceases to exist and the undying trigger won't have anything to bring back.

Q: When I cast Gravepurge and target a bunch of creatures in my yard, in what order do they go on to the top of my library? I was thinking either in a random order or in the order they were in my graveyard....

401.4. If an effect puts two or more cards on the top or bottom of a library at the same time, the owner of those cards may arrange them in any order. That library's owner doesn't reveal the order in which the cards go into his or her library.

Q: Can Elbrus, the Binding Blade be my commander? It's legendary and a creature sometimes!

A: Only creature cards can be commanders, and Elbrus is only a creature card when it's on the battlefield and transformed. For all other purposes, including deck construction when choosing a commander, it's just an artifact. Like we've mentioned before, Elbrus's color identity is black, so it can't be included in decks where your commander's color identity doesn't include black.

Q: I attack with a creature equipped with Elbrus, the Binding Blade, and Elbrus transforms. Is Withengar Unbound tapped if the creature that attacked didn't have vigilance?

A: Withengar won't be tapped. Though it's somewhat common for players to tap equipment cards along with the physical creature card that's attacking, that isn't actually a clear representation of what's happening. The rules say only the creature taps, not anything that may be attached to it. If Elbrus was tapped for whatever reason, then Withengar will still be tapped when he's transformed into, but it will normally be untapped. 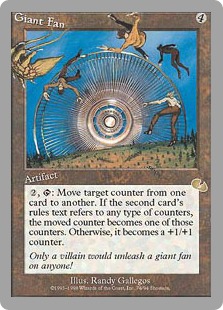 There are lots of Giants Fans
in New York!
Q: Do counters leave the game when the player who put them there leaves the game?

A: No one controls or owns counters on permanents, they're just things that are there. The -1/-1 counters someone put on your creature are going to stay there even if that player left the game.

A: There's no way to do this. Glory's ability states that it can only be activated from the graveyard, and Havengul Lich is on the battlefield when it's gaining activated abilities of Glory. Even if your Havengul Lich winds up in your graveyard later, it'll be a new object to the game and won't have any memory of stealing Glory's ability.

Q: There's a Yixlid Jailer out. If I cast a creature card from a graveyard with Havengul Lich, will it gain any activated abilities?

A: Strangely enough, no. Havengul Lich triggers when you cast "that card". The triggered ability won't find "that card" in the graveyard anymore, so it'll use the object's last known information. At the time, the creature had no abilities, so your Lich won't gain any new tricks.

Q: If my Loyal Cathar dies and my opponent casts it with Havengul Lich, do I get it back at the beginning of the end step?

A: Sadly he's not that Loyal. He won't be in the graveyard anymore, and his delayed triggered ability won't be able to find him since he changed zones and became a new object.

Q: What happens when I use a Phantasmal Image to copy my opponent's Ulamog, the Infinite Gyre?

Q: If I bounce Dungeon Geists back to my hand in response to its ability targeting a creature, does that creature just stay tapped forever?

A: Nope. Dungeon Geists's ability has a duration, which is for as long as you control Dungeon Geists. That duration is going to end before it even begins, and rule 611.2b says that when that happens, the effect doesn't even try to start!

Q: Can I use Ghoulcaller's Chant to return both Nameless Inversion and Crib Swap

A: Yep! Both of those are Zombie cards. They're not Zombie creature cards, so they won't get to party with the other Zombies during the Zombie Apocalypse.

Q: With a Kormus Bell on the battlefield, can anyone use a fetchland to fetch out a Swamp if there's a Grafdigger's Cage out? 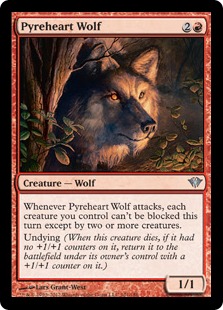 Pyre<3 Wolf!
Happy Valentine's Day!
Q: My opponent put a Curse of Death's Hold on me, and my hand's full of X/1 creatures, including a Pyreheart Wolf. If I play that Wolf, will it die and come back and immediately die again before the +1/+1 counter goes on?

Q: If I attack with Pyreheart Wolf and my opponent blocks with two 1/1 Spirit tokens, what happens if I Geistflame one?

A: Then your Pyreheart Wolf is still blocked, and is going to die, or undie as the case may be. Pyreheart Wolf's ability only affects the declaration of blockers. Once blockers are declared, the "two or more" rule doesn't matter anymore.

Q: With Rooftop Storm and a Gravecrawler on the battlefield, can I get an arbitrarily large number of counters on Grimgrin, Corpse-Born?

A: Sure! You can pay 0 instead of paying the mana cost for Zombie creature spells, and it doesn't matter where you're casting those spells from. You can sacrifice your Gravecrawler to Grimgrin, then keep recasting him from the yard for as long as you control a Zombie and a sac outlet, or a Zombie that is a sac outlet like Grimgrin.

Q: When I'm attacked by Thraximundar, is there any way to flash in an Aven Mindcensor to block without having to sacrifice it before blockers?

Q: With Knowledge Pool out and a Curse of Exhaustion on my opponent, can my opponent ever cast a spell?

A: He can, but he won't be doing much other than giving you more options for your next excursion into the Knowledge Pool! He casts a spell, and it's exiled and sent to the Knowledge Pool. The Pool then wants him to cast a spell from underneath it, but Curse of Exhaustion says they can't.

Q: Suppose I control a Jinxed Idol and a Strangeroot Geist with no counters, and my opponent, who has no creatures, casts Timely Reinforcements. I want to make it so he doesn't get any tokens off the reinforcements. Can I sacrifice my Geist to give him the Idol, have the Geist return to the battlefield with the counter, and sacrifice it again before the first Idol trigger resolves to make sure he doesn't get the tokens?