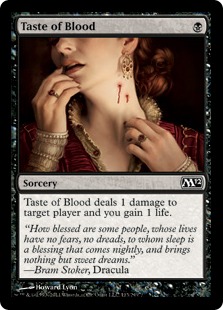 Just a little taste...
Greetings! It's Monday, and that means that it's once again time to answer some Magic rules questions! February is almost over, which means that it's almost March, and March will bring a lot of exciting things to the world of Magic in general and to Cranial Insertion in particular. One of those exciting things is the Grand Prix in Indianapolis on March 10th, and I'm happy to be on staff for that. The format is Legacy, so I'm hoping to return from that trip with lots of interesting questions about Legacy.

There are also some other things happening in March, but before I announce those, let's dive into this week's selection of questions. Don't forget to send in your questions to [email]cranial.insertion@gmail.com[/email] or tweet them to @CranialTweet!

Q: So, I have a creature that's equipped with Livewire Lash, and I cast Deadly Allure on it. Does the Lash trigger deal deathtouch damage right away?

Q: My opponent controls a Strangleroot Geist that has a +1/+1 counter on it, and I have a Phantasmal Image that's a counterless copy of my opponent's Geist. What exactly happens if I blow up the board with Day of Judgment?

A: Essentially, you'll have a dumb 1/1 on your side. Your opponent's Geist doesn't come back because it had a +1/+1 counter on it, but your Image died as a copy of a Geist, so it comes back with a +1/+1 counter on it. Since there's nothing for it to copy, it'll just be a sad 0/0 that only survives thanks to that +1/+1 counter. Oddly enough, this 1/1 Phantasmal Image won't have the "look at me and I die" ability, since that ability is only acquired as part of the copy effect. Since it's not copying anything, it doesn't have that ability.

Q: So, I just cast a Massacre Wurm, and it massacred my opponent's Strangleroot Geist by giving it -2/-2 until end of turn. When the Geist comes back with a +1/+1 counter, does it die again right away because my opponent's creatures still have -2/-2?

A: No. Massacre Wurm's enter-the-battlefield ability creates a continuous effect that changes the characteristics of objects, specifically their power and toughness. Such effects lock in what they apply to when the effect is created, so the newly undead Geist won't be affected by the Wurm's -2/-2 effect.

Q: Two weeks ago you answered a question about Dungeon Geists that confused me. You stated that Dungeon Geist's effect doesn't even start if it's bounced in response to its enter-the-battlefield ability. Does that mean the targeted creature won't even be tapped?

A: No, it doesn't mean that. Dungeon Geist's enter-the-battlefield ability attempts to create two effects. The first is a one-shot effect that taps the targeted creature. The second is a continuous effect that keeps that creature tapped for a while. Rule 611.2b says that the continuous effect won't be created, but that doesn't stop the one-shot effect from happening, so the creature will still be tapped. It just won't stay tapped for very long.

Q: Let's say I attack with a bunch of werewolves, and one of them is Instigator Gang. After blockers are declared, I cast Moonmist to turn my puppies into bigger, meaner puppies. Do they now get +3/+0 right away from Instigator Gang's night side, or did the +1/+0 get locked in when they attacked?

A: Good news, your attackers get +3/+0 right away! Instigator Gang and Wildblood Pack have static abilities that create continuous effects. Such effects are always on, and they continually apply to whatever the ability refers to. When Instigator Gang turns into Wildblood Pack, the +1/+0 immediately stop applying, but the +3/+0 immediately starts to apply and makes a nice chunk of extra surprise damage. 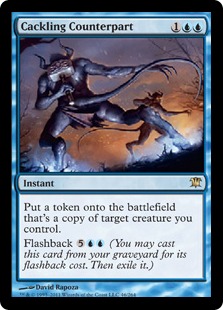 Warning: Using pet monkeys as tokens
is not recommended.
Q: If I have a Cackling Counterpart token copy of Mirror-Mad Phantasm, can I activate its shuffle ability to reveal cards until I hit a Mirror-Mad Phantasm card? I'm wondering if the "if that player does" clause stops that due to the token not actually being shuffled into the library.

A: Yes, that works. As far as the game is concerned, you actually do shuffle the token into your library. However, the token will soon cease to exist when state-based actions are checked, and nothing in the game will actually notice the token in the library before then, so it's a common and acceptable practice to put the token off to the side and then shuffle the library without it. This works out much better in practice than literally shuffling the token into your library, especially if the items you use to represent tokens aren't exactly card-shaped, such as coins, pillows, or pet monkeys.

Q: The other day I was playing against a blue-black control deck, and whenever I tried to cast a threat, my opponent would respond with Snapcaster Mage, giving flashback to Mana Leak, and then countering my spell with that Mana Leak. Is that legal? I thought Mana Leak would only get flashback after the stack resolves, which means that my spell would have resolved by then already.

A: Yes, your opponent's play is perfectly legal. "The stack resolves" is a phrase that is, unfortunately as common as it is, incorrect. The stack does not resolve as one big mess. Spells and abilities on the stack resolve one by one, and both players get the opportunity after each resolution to add more to the stack, on top of the stuff that hasn't resolved yet. This means that your opponent can respond with Snapcaster Mage, let Snapcaster Mage resolve, let Snapcaster Mage's enter-the-battlefield ability resolve, and then flash back Mana Leak before your spell would resolve.

A: Sure, that works. The resolution of Havengul Lich's ability creates a continuous effect with a duration. The duration is simply "this turn," so the effect lasts for the remainder of the turn regardless of what happens to the Lich that created the effect.

Q: How impressive is Doran, the Siege Tower in a fight?

A: Unfortunately, he's not very impressive at all. His ability only applies to combat damage, and fighting damage is not combat damage, so he just stands there and says "hit me," which is good for comic relief but bad for winning fights.

Q: Does Mikaeus, the Unhallowed give undying to Chameleon Colossus? Since the Colossus is both Human and non-Human, I'm not sure which side wins.

Q: Can Tallowisp tutor for Threads of Disloyalty?

Q: Is Phyrexian Unlife as awesome with Ad Nauseam as I think it is?

A: I'd say so, yes. Phyrexian Unlife changes damage into poison counters once your life total reaches 0 or less, but Ad Nauseam doesn't deal damage. Ad Nauseam makes you lose life, and you'll continue to lose life even if your life total goes far into the negative numbers. This means that you can keep digging through your library until you find the cards you need to take out your opponent, hopefully before your opponent finds some enchantment hate for your Phyrexian Unlife.

Q: My opponent is playing a Delver deck, and I want to use Runed Halo to protect myself from that pesky fly. Do I have to name "Delver of Secrets" or "Insectile Aberration" to protect myself?

A: Each face has a different name, and you have to name the face from which you want to have protection. Assuming that "Insectile Aberration" poses the bigger threat to you, that's what you should name. 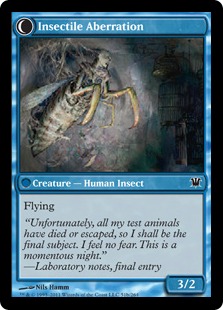 Pretty fly for a blue guy
Q: Can I respond to Delver of Secrets' upkeep trigger with Brainstorm to increase my chances of transforming the Delver?

A: Sure, that works. The ability is a run-of-the-mill triggered ability that uses the stack, so you can respond to it. As long as you have an instant or sorcery in your hand or among the top three cards of your library, you can virtually guarantee a transformation by leaving an instant or sorcery on top with Brainstorm.

Q: Let's say I cast Piracy and my opponent doesn't tap his Forbidden Orchard in response because he doesn't enjoy giving me a 1/1 token. If I tap his Orchard for mana now, does my opponent get a token?

Q: I'm preparing for a Legacy tournament, and I'm looking into ways to beat storm combo decks. If my opponent casts Tendrils of Agony with a lethal storm count, can a Chalice of the Void with zero or four counters save me?

A: Tendrils of Agony has a converted mana cost of 4, and so do its storm copies, so a Chalice with zero counters won't do a thing. A Chalice with four counters does a little bit more, but probably not enough to save you. Chalice of the Void only triggers when a spell is cast, and the storm copies just get copied on the stack without ever being cast. The Chalice will counter the original, but your opponent probably played around that by building a storm count that's high enough to kill you with just the storm copies.

Q: That sucks. What about Flusterstorm?

A: You'd think so, but unfortunately you can't do that. During the process of casting a spell, only the player that's casting the spell gets the opportunity to activate mana ability. You're not that player, so you'll have to wait until you have priority to activate the Searchlight. By then, your opponent's spell has already been cast, so it's too late to charge it up with more mana.

Q: At Friday Night Magic, I added two Naturalizes and two Autumn's Veils from my sideboard to my deck to add some answers to my opponent's Bant Pod deck. I was then told that I also had to remove four cards from my deck. Is that correct?

A: Yes, that is correct. In Constructed tournaments, such as Standard FNM, you can only exchange cards with your sideboard on a one-for-one basis. FNM Limited tournaments, such as a draft, are different. In Limited at Regular REL, you're allowed to add or remove as many cards as you wish as long as the resulting deck has at least 40 cards.

And that's it for now, but before I go, I'll finish with the announcements that I promised earlier.

First off, regular readers may recall that I am organizing an annual charity Magic tournament for the National MS Society. This year marks the third annual Cast a Spell on MS, and I'm hoping it'll be even more successful than last year's. If you're in Toledo, Ohio on March 24th, come on over, play the game you love for a good cause and win nifty prizes! Check out the event website for details!

The last announcement is... well, it's actually still a secret. However, I can announce that Brian will have big news to announce next week! Don't miss it!